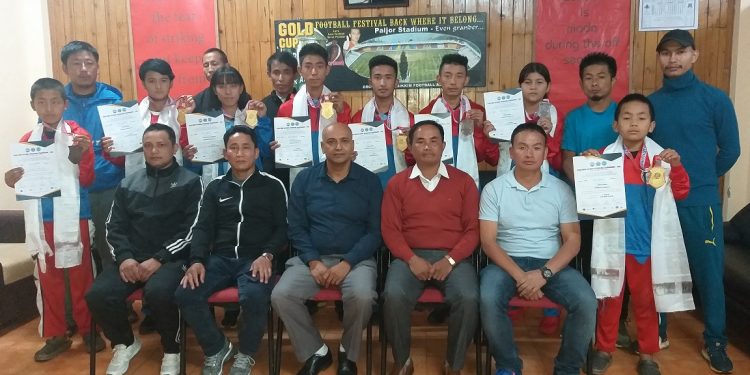 The championship was held from September 17 to 20 at Dr B R Ambedkar Sports Indoor Stadium of Karimnagar in Telangana.

Rohit Poudyal bagged one gold medal and one silver medal.

The academy was started by international kick-boxer Bhim Bahadur Subba in 2013 to promote kickboxing in rural parts of the State.

Members of the academy have been continuously winning medals for the State since establishment.

In his address, Bhandari congratulated the entire team members for winning medals and laurels for Sikkim.

He also congratulated SAKO for continuously producing national and international kick-boxers from Sikkim.

He mentioned that the Sports & Youth Affair Department has been planning to provide better training to young and promising athletes outside the State.

The secretary asserted upon maintaining discipline and consistency in sportspersons to do better in the future.

He encouraged young kick-boxers to increase their competitive spirit and to make their successful career in sports.

SAKO chief technical director, Bidhan Ballav Subba said kickboxing was introduced in Sikkim in 1998 and has witnessed lots of success and achievement in this long journey.

He mentioned there were lots of contributions from different sides in the journey of kickboxing in the State for producing national and international kick-boxers from Sikkim.

He motivated the team members to take sports professionally to make successful career and to shine the name of the State and the country in sports.