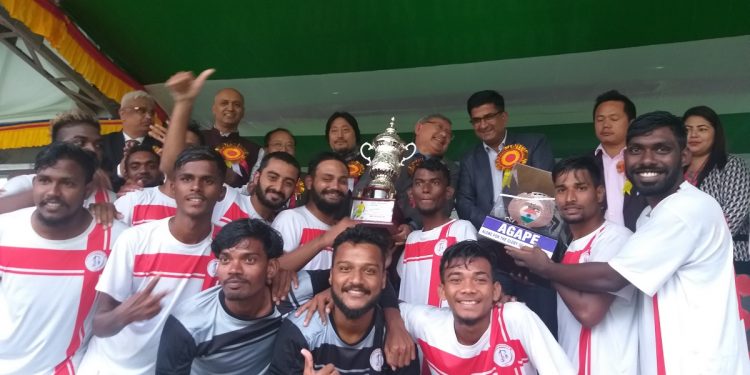 The final was played on Sunday afternoon at Paljor Stadium in Gangtok.

In a keenly contested final Goa has outplayed Nagaland 2-0.

Thirteen states had participated in this three-day long championship.

The tournament was held on the theme ‘Growing Together in Harmony’.

The final day of the tournament has also witnessed the felicitation of former Indian football team skipper, Padma Shree Bhaichung Bhutia by the organizing committee.

He was accompanied by forest minister, Karma Loday Bhutia, agriculture and horticulture minister, Lok Nath Sharma and political secretary to the chief minister, Jacob Khaling as guests of honour among other dignitaries.

The chief guest and guests of honour gave away trophies to winning and runners-up teams.

West Bengal team was adjudged as the Best Disciplined Team, while Man of the Final Match trophy was awarded to Xavier Pius of Goa.

The closing ceremony also witnessed Singhey Dance and Yak Dance by artistes of the Culture Department.

Earlier, the final day of the tournament started with the opening prayer by Fr Rev Robin Kalikotey and concluded with vote of thanks by the organizing committee treasurer, Arthur Targain and closing prayer by Rev J Lepcha.

It is informed that the shortlisted players from the tournament will represent the country in the upcoming United World Cup to be held in Japan in 2020.