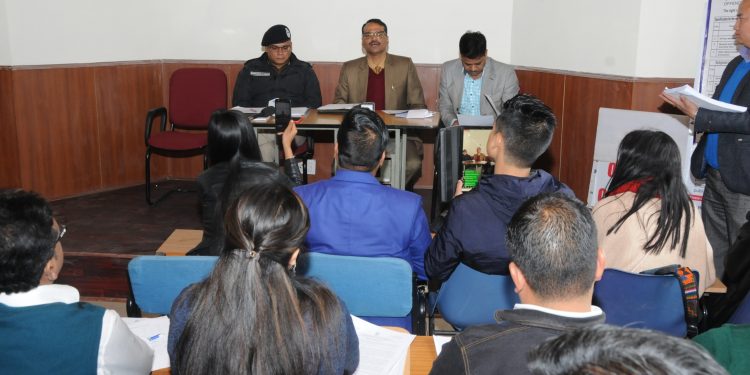 Sikkim chief electoral officer R Telang has appealed to the electorates of the state to exercise their franchise in a conscious manner and without having any doubt in mind.

Telang while adressing media persons ahead of the ensuing Lok Sabha and Assembly polls, higlighted the preparations of the Election Commission for the polling and counting day and the facilities arranged for the voters.

Sikkim will vote for the Assembly polls and Lok Sabha elections to be simultaneously held on April 11, 2019.

Sumitra Rai, a 105-yeas-old woman from the 10-Poklok-Kamrang Assembly constituency in South Sikkim, is the oldest voter in the state.

Also read: Sikkim to have Assembly, parliamentary polls on April 11

The CEO also informed that adequate Central Armed Police Force (CAPF) personnel and micro observers have been deputed at the critical polling stations which will have webcasting arrangements as well.

Kupup Primary School under 21 Gnathang-Machong AC, situated at an altitude of 13,400 ft, is the highest altitude polling station in the state with 288 voters.

The CEO also informed that there are a total of 2042 persons with disabilities (PWD) voters in the state who will be assisted by school students as volunteers during polling.

The total number of candidates contesting stands at 161 which include 11 candidates for the lone parliamentary constituency.

A total of 11 counting halls in 4 locations across the state will ensure smooth and timely completion of the counting process.

The CEO further highlighted that more than 42,000 mock votes have been cast during SVEEP awareness campaigns throughout the state covering 10% of the total voters of the state.

He informed that allocation of all constituency voting machines, polling stations, polling parties and police teams have been randomised according to ECI Guidelines so as to rule out any fallacies.

He said that one voter guide is also being handed over to each family and voter slips have also been distributed to individual voters.

Talking to the media, Inspector General of Police (Law & Order) Gyanendra Kumar Verma informed that the total police strength deployed for the elections all over the state is 4,000 police personnel including the para-military forces.

He mentioned that the forces are being utilised to the optimum, right from guarding of the strong rooms, manning critical polling stations and all women polling stations, conducting area domination drives amongst others.

All firearms have been deposited with the police forces except for those that are commissioned to be used by the law and order forces.

He stated that prompt action has been taken and perpetrators have been booked.

The top police official also said that all security arrangements all over the state are in place to ensure a safe environment for the voters of the state.