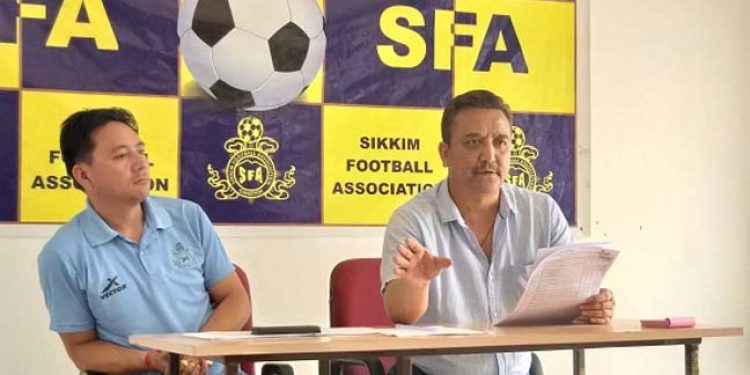 Sikkim Football Association (SFA) released its annual calendar of football and other activities for the season 2019 at the SFA Football House in Gangtok on Saturday.

As per the SFA calendar, this season will be started with C-Division State League from May 20 and will finally end with AIFF D-Licence course in December this year.

Addressing a press conference at Gangtok on Saturday, SFA vice-president Sonam T Ethenpa mentioned that apart from its regular tournaments and events, the association has also included few more events this season.

He informed that SFA will organize SFA U-17 Sikkim League for the first time in the state, mainly to provide better and bigger platform to the young footballers of the state.

“This league is also a selection trial for the upcoming junior national games. The selection committee shall shortlist the best 30 players from the league for the state camp to bring out a strong team of Sikkim,” Ethenpa said.

The league will have eight teams which will be divided into two groups.

The player must be born on or after July 1, 2003 and COI and birth certificate of the players is mandatory, no other document indicating the birth date and year will be entertained, it is informed.

Likewise, SFA is also organising the Pre Independent Football Qualifying Match (knock-out) from July 23 to July 31 for the first time in the state.

This tournament will have six premier division clubs and the top two teams will be qualified for the Independent Cup 2019, informed Ethenpa.

Ethenpa stated that SFA will also organize Futsal Tournament for the first time in the state from November 3 to November 10, which will have around 20 teams.

He added that SFA has also decided to organise Women’s Sikkim League Football Tournament again from October 14 to October 20.

All India Governor’s Gold Cup Football Tournament 2019 will be held from October 12 to October 27 with funds and approval from the AIFF. SFA will also organize Referee Refresh Course in November and AIFF D Licence Course in December.

Ethenpa informed that SFA has also received an offer from AIFF to organise the East Zone round of Santosh Trophy in Sikkim in the month of September.

“It is a golden opportunity for the state to host a round of such prestigious tournament but it is difficult to meet the requirement and guidelines of AIFF to host this round. However, the final decision has to be taken in the meeting of SFA but it very likely to decline this offer as we do not have infrastructure and facilities asked by AIFF,” he said.