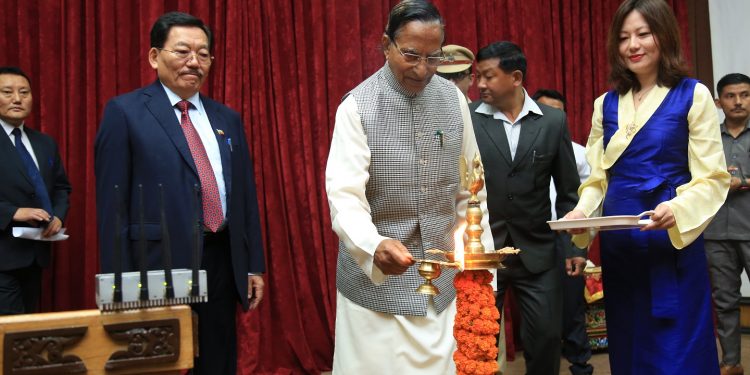 Sikkim celebrated its 44th Statehood Day at Chintan Bhawan in Gangtok on Thursday. Governor Ganga Prasad was present as the chief guest, while chief minister Pawan Chamling was the guest of honour.

On the occasion, L D Kazi Award for Democratic Rights was presented to late Namgyal Tshering Euthenpa, which was received by his daughter Chumsey Doma. The award carries a cash prize of Rs one lakh. Likewise, Jeevan Rakshak Padak Award 2018 was presented to Chandra Kumar Gurung for his act of bravery of saving the life of a man who accidently fell into Rani Khola.

Addressing the function, the Governor expressed his best wishes to the people of Sikkim on the 44th Statehood Day. He mentioned that the State Day was a joyous occasion when the people of Sikkim can recall with pride, enthusiasm and satisfaction the multifarious and significant achievement made by the State Government during the past years. He stated that Sikkim was ahead the development and other areas in the country.

He expressed that Sikkim emerged as one of the best State in the country in a short period. He added that even the Prime Minister Narendra Modi has applauded the initiative and achievements of Sikkim in organic farming in different national and international platforms.

The Governor stated that the Prime Minister termed Future Policy Gold Award, 2018 received by Sikkim as equivalent to an Oscar and complimented the State Government and the people of Sikkim for the overall development.  He also congratulated the chief secretary, state eElection Commission, chief electoral officer, district election officers and all officials and staffs involved in conducting a free, fair and peaceful election as a festival ofdDemocracy.

In his address, chief minister Chamling stated that the people of Sikkim have shown the high level of patriotism with their willingness to merge Sikkim with the union of India to become the 22nd State. He mentioned that the Referendum of 1975 was agreed unanimously and only two per cent of the population of Sikkim voted against it, which shows the willingness of Sikkimese people to be a part of the Indian Union.

He stated that Sikkim has peace and security and witnessed unprecedented development in 25 years of Sikkim Democratic Front government in Sikkim.

He added that the government has fulfilled all basic minimum needs of the people of Sikkim in these 25 years. He mentioned that all major infrastructures and developments in all sectors and industrialization in the State have been took place in the SDF government.

He added that the government employees of Sikkim have been getting the best salaries and facilities in the country and there was peace, security and respect for businessmen to do their work freely in the State.

“I have made lots of sacrifices in my life to provide the comfort, happiness and qualitative life to the people of Sikkim,” the chief minister expressed. He stated that Sikkim has made tremendous achievements in different sectors due to the right thoughts and policies.

He mentioned that organic farming and other eco-friendly endeavours of Sikkim have been getting appreciation and recognitions in the national and international levels. He added that these initiatives of Sikkim government were the biggest contributions towards the environment of the world.

However, the Chamling alleged that attempts have been made to break the peace and security and disrupt the development of the State.

In the same breath, he asserted that the people should have the feeling to serve, love and respect the state by inculcating the sense of belongingness and ownership.  He further urged the people to deliver their responsibility towards the State and work in the interest of Sikkim.

He also urged the people to always ensure that Sikkim should remain in the safe hands. He expressed that Sikkim got the democracy after paying an expensive price so it should not be misused but to use it properly. He further stressed that the people of Sikkim need to identify the right person to maintain the peace, security and development of Sikkim.