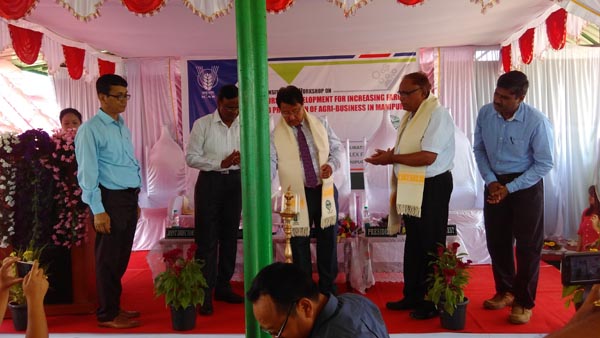 A day long state level sensitization workshop on Agripreneurship development for increasing farm income and promotion of agri-business in Manipur was held at Indian Council of Agricultural Research (ICAR) Imphal centre on Tuesday.

Addressing the workshop which was attended by many agri-entrepreneurs from various places of the state and scientists, Prof Premjit expressed the need to replace the conventional forms of rice cultivation into a mechanized farming by using the high yielding rice variety and integrated crop management etc.

The Vice chancellor of the largest agricultural university which has 13 colleges under it across the North Eastern states also asked the concerned implementing agencies to focus on the unemployed youths of the region while imparting the necessary training programmes for the Agripreneurship development.

Highlighting the success rate of farmers training programmes of the university in fishery and livestock production, he opined that such move can help in getting better success rate.

He however advised to conduct impact analysis of such training programmes in future.

General Manager PN Praveen Kumar of NABARD while delivering his speech in the day’s gathering highlighted the prospects and importance of getting bank loans and other important banking areas for the farmers and enterprenuers. Director N Prakash of ICAR Umiam also spoke on the occasion.