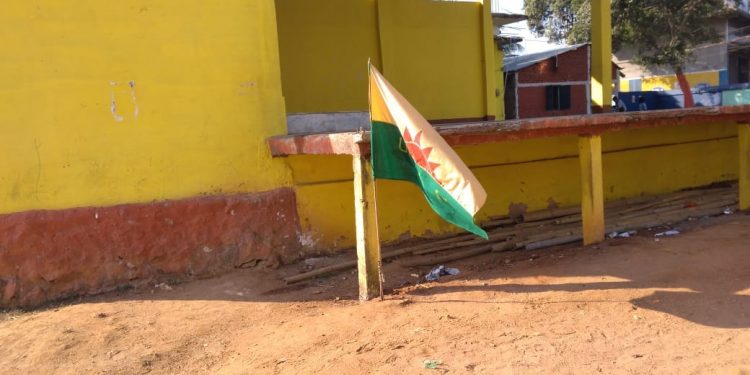 Sensation prevailed early Wednesday morning when locals of Hegrabari and Borbari in Guwahati, the capital city of Assam witnessed two flags of the proscribed militant outfit ULFA-I flying in the areas.

Hoisting of two flags of the banned insurgent outfit right in the heart of Guwahati and that too very near to the high security zone of the capital compex at Dispur is indeed viewed by concerned circles as serious lapse in law and order scenario of the gateway of Northeast in particular and the entire State in general.

Several denizens of Guwahati have expressed concern over Assam Police claims of heightened security arrangement ahead of ULFA’s protest day on November 28.

Notably, November 28 is observed by the outfit as a protest day against the ‘Operation Bajrang’ launched on November 27 way back in 1990 and the State Police force was on toes in apprehension of any subversive activities.

Later, officials from Dispur police station seized the flags and took the same into their possession.

Meanwhile, police have begun investigation into the whole incident and picked up two persons for questioning.

Notably, the outfit has exhibited upsurge in recent times and is executing subversive activities in eastern part of the State.

A major explosion executed at Demow in Sivasagar district had led to killing of two innocent Hindi speaking people.

ULFA-I had claimed responsibility of the incident.

Though the militant outfit had denied their involvement in the firing spree, Assam Police are still maintaining that it was the handiwork of ULFA-I.

Again, the recent reports of several youths from across the State, especially eastern part joining the insurgent outfit is giving headaches to the state police force while raising disturbing questions among the concerned circles of the State.