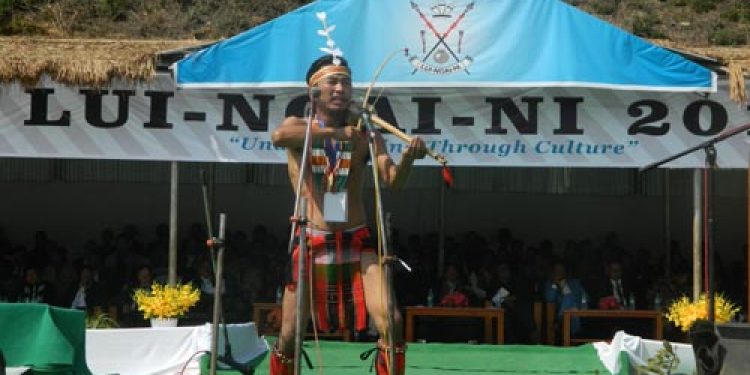 The Lui- Ngai- Ni, the seed Sowing Festival of Nagas, was held with the theme “Understanding Through Culture” at Mini Stadium, Senapati District Headquarters, 60 km north of Imphal on Friday.

The festival was hosted by Naga People Organization and held under the aegis of United Naga Council.

Lui-Ngai-Ni is one of the biggest festivals of the Naga community. The festival assumes much significance among the people of North East as it appeals for peaceful co-existence.

Speaking on the occasion minister Dikho stated the Lui- Ngai- Ni has been celebrated regularly with the displaying and sharing of cultures. He applauded the organizer teams for bringing various civil societies and organizations together.

He also stated that the seed has been sown for the better harvest. As people are concerned of environment he appealed the people to be more responsible by planting more trees and conserving the resources. In his last inspection at Senapati District Headquarter Water Supply source at Khabung Karong, he was surprised with the high potential of water source.

Senapati District being one of the water scarcity towns, he assured a new government project will be implemented shortly which will be made available to the town in all seasons. He appeals the people to bring more blessing with the celebration of Lui- Ngai- Ni 2019.

MLAsKhashim Vashum (Chingai) and Samuel Jendai(Tamenlong) attended the program and were the Guests of Honour of today function.