The Indian Elephant (Elephas maximus) is accorded with the highest degree of protection under the Indian laws and is listed as a Schedule I animal under The Wild Life (Protection) Act, 1972.

Elephant is also declared as the ‘National Heritage Animal’ by the Ministry of Environment, Forests and Climate Change. The common men in India revere the Elephant and often refer to it as Ganesh Baba, referring to the elephant headed Hindu god Ganesha.

But the plight of Elephants on the traditional elephant corridors converted to railway tracks in Assam is of great concern and requires urgent intervention from the concerned authorities.

On the night of February 10, 2018, five elephants, including three calves, died after being hit by the Guwahati-Silchar passenger train, which ran into a herd of elephants at central Assam’s Hojai district. 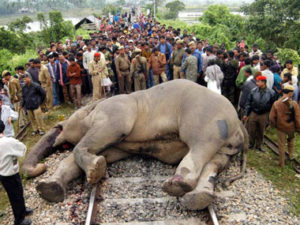 Just two months earlier in the early hours of December 10, 2017, five elephants, including a pregnant one, were killed when the Guwahati-Naharlagun Intercity Express hit them near Balipara area under Sonitpur district.

Again, a few weeks prior to Balipara incident, on the night of November 18, 2017, a speeding train mowed down two wild elephants at Thakurkuchi, only 19 km east of Guwahati, with both the elephants having died instantaneously.

In comparison, the seriousness of the issue at hand can be gauged from the fact that nearly an equal number of elephants, if not more, have died due to train hits in Assam in the last 12 months itself.

According to news published in The Assam Tribune, dated February 24, 2018, a high-level probe by the Forest Department into the above mentioned killing of five elephants by a train in Hojai district, has found that the passenger train was running at a speed of 60 kmph in the notified elephant corridor, whereas the speed restriction in the said area is 30 kmph.

The probe also countered the claim by Northeast Frontier Railway regarding the site of the incident, which according to the said investigation is between 166/9 and 167/0 KM and not between 167/0 and 167/7 as claimed by the railways, and the said area between 166/6 and 170/0 KM is specified as elephant corridor in page 30/31 of Book of Working Time Table No 90 provided by the NF Railway.

It was reported that the Forest officials had alerted the station master of Lumding Railway Station at around 8 pm about the presence of the elephant herd in the stretch, around one hour and 40 minutes before the accident took place.

It is clearly evident from the reported investigation into the said incident of elephant death, that there was gross negligence and dereliction of duty on the part of the concerned officials of NF Railway.

But it is not known as to whether any action was initiated against the erring officials or whether any corrective measures have been initiated by the Railways to avoid any future occurrences?

It has been observed, that majority of the incidents of elephants being hit by trains usually occur during night time.

And with gauge conversion being done from meter gauge to broad gauge across Assam, allowing faster movements of trains, the numbers of elephant deaths due to train hits have also increased.

Experts have suggested reducing the speed of trains in the most vulnerable stretches of the train tracks and elephant corridors to avoid train-elephant collusions.

But as mentioned earlier, in the incident at Hojai district, instead of giving heed to the early warning of the Forest officials, the train continued in speed above 60 kmph, double the permitted level for that given stretch, highlighting the fact that unless proper mechanism, especially coordination and communication among the concerned authorities is in place, such elephant deaths due to train hits are unlikely to stop.

It is important that the speed of trains, are reduced in the vulnerable and known stretches of the tracks, at all times, so as to avoid any train-elephant collusion.

Whenever elephant deaths occur due to train hits the concerned authorities talk about, constructing overpasses and underpasses at vulnerable crossing points but as the news fades away, such plans, are either forgotten or put in the back burner.

It is important to keep in mind, that, the increasing number of train-elephant collusions not only results in the death of the elephants, but also pose a threat to human lives, particularly the train passengers, as there are all possibilities of train derailment due to such collusions.

Therefore, it becomes imperative for the authorities concerned to explore the feasibility of constructing such underpasses and overpasses and undertake time bound pilot projects at critical elephant corridors, to assess their success and ascertain whether wild elephants would use such engineered passages for crossing the railway tracks.

It is reported that in Uttarakhand, due to similar problem of elephant movements close to railway tracks, the Uttarakhand Forest Department has decided to use drone cameras to keep an eye on animal movements, primarily elephants.

It is reported that a drone can fly at a height of 2000 meters and cover a stretch of nine km and the Uttarakhand Forest Department will be using five drones in the first phase in two railway tracks, which have elephant corridors in a pilot project.

The said drones will be flown 30 minutes prior to the scheduled run-time of a train, and if they notice an elephant or a herd near the tracks, forest officials will inform the railway station master concerned, who will then direct the loco pilot to reduce the speed of the train in that area. In Assam also, the concerned authorities should consider using modern technologies like drones, alarm systems, among others, to monitor movements of elephants and other animals near train tracks so as to be able to avoid any collusions.

The Northeast Frontier Railway should be required to take into account the said aspect and incorporate it in their construction planning process, so as to enable free movement of elephants and other animals from one fragmented forest to another without having to lose their life.

The Railway authorities should also issue standing instructions to the loco-pilots to slow down the trains while passing through the identified elephant corridors and also to stop the trains when elephants crossing the tracks are sighted, keeping in mind the due safety of passengers.

The Railways must also conduct high level inquiries into any incident of killing of elephants by running trains, make the findings public and initiate punitive actions against any railway officials including the loco-pilot, if found negligent or violating standing instructions.

The State Forest Department should also strengthen their surveillance around the elephant corridors and other animal crossings as well and promptly communicate to the Railways.

The feasibility of having a joint control room with the Railways also should be explored for effective regular surveillance on elephant movements and stop hits by trains.

Vikram Rajkhowa, an advocate of Gauhati High Court is a wildlife lover and can be reached at [email protected]