The State bank of India (SBI) on Monday inaugurated new ATM at Bodoland University, the second branch of the SBI in higher educational institutions in Kokrajhar after Central Institute of Technology (CIT) opened recently.

The new ATM in front of the main gate of Bodoland University was inaugurated by the Vice Chancellor of the University, Prof Hemanta Kr Baruah in presence of Chief General Manager of the SBI, North Eastern Circle, PVSLN Murthy and General Manager OP Mishra.

The inaugural programme was also attended by the registrar of BU Dr Shekar Brahma, Director of Bodoland College Infrastructure Development Committee, Dr. Dinanath Basumatary and others.

The Chief General Manager of the SBI, North Eastern Circle, PVSLN Murthy hoped that the new ATM at Bodoland University will cater to the needs of the teachers and students coming from various parts of the country.

He also said that the students and teachers as well as employees need not go to Kokrajhar town for required cash now. 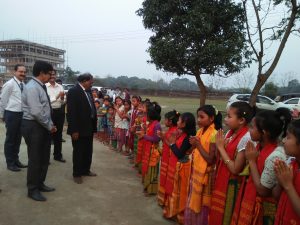 State Bank of India on Monday also distributed essential materials to the orphan students of Alayaron Anath Ashram at Debargaon in Kokrajhar.

The essential materials were distributed by the Chief General Manager of the SBI, North Eastern Circle, PVSLN Murthy in presence of principal of the Ashram Kanan Basumatary and other higher officials of the SBI, north-eastern region and Kokrajhar branch.

Earlier, the Chief General Manager of the bank interacted with the children.

The Alayaron Anath Ashram authority has extended their gratitude to the bank authorities for supporting the orphaned children with essential materials.