Assam Governor Prof Jagdish Mukhi on Saturday termed Sankardeva a great saint whose contribution shall be remembered by the people of the state ever after. This was stated in an official press release.

Speaking at the occasion, Prof Mukhi said that he was glad to see the sea of humanity congregated on the occasion of the 87th annual conference of Srimanta Sankaradeva Sangha, named after the great medieval saint of Assam who strove hard to redeem humanity by engineering social reformation and spiritual transformation.

Stating that Sankardeva’s knowledge and skill in different performing arts is unparalleled in human history, the Governor urged upon the people of the State to work towards making the teachings of the great saint popular across the globe and the youth should be motivated to accept the principles of the saint in their lives. 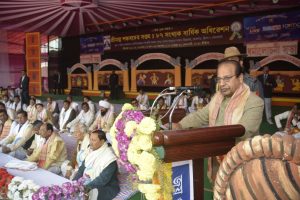 Prof Mukhi also said that Sankaradeva was the greatest builder of Assam who deserved to be mentioned along with Sankaracharya, Basavappa, Ramananda, Kabir, Chaitanya, Mira Bai, Guru Nanak and Tulsidas. “He was truly the medium through whom the spiritual light of medieval India as a whole shone,” said Prof Mukhi.

Sankaradeva, during his pilgrimages to various religious sites in India, grasped the essence of Indian culture and tried his best to build bridge linking Assam to the main land of the country, he further said.

“Sankaradeva spread his egalitarian philosophy taking villages as units. He established namghars in each village and from there spread his message of devotion to one God. These namghars even now serve as ‘little parliaments’ where justice is meted out to villagers, education is imparted to village children, entertainment is provided to village people,” the Governor added.

The Governor also hailed the efforts of  Srimanta Sankaradeva Sangha founded in 1930 which has opened about 56 schools for spreading education in different parts in the State, especially in remote areas so that marginalized sections of the society can receive education and prepare themselves to meet the challenges of life.

Former Chief Minister Tarun Gogoi, member of Parliament, Gaurav Gogoi along with a host of other dignitaries were also present in the convention, the release added.