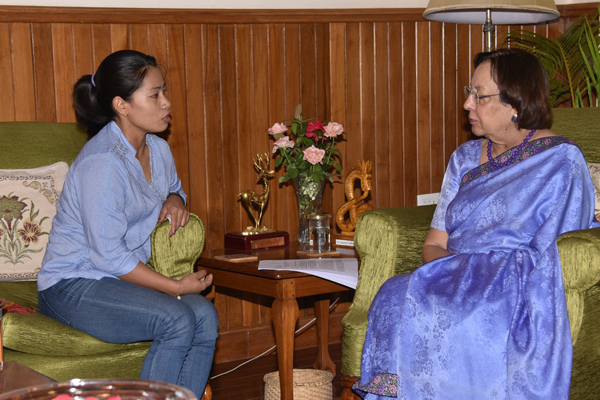 The weightlifter sought intervention from the Governor regarding doping allegations against her.

The weightlifter narrated her ordeal of being charged with doping and threat of losing her medal. The governor assured her that the matter would be looked into.

Sanjita Chanu was provisionally suspended after she failed a dope test for a banned anabolic steroid, according to International Weightlifting Federation (IWF).

She had won a gold medal in the 53kg category in the Commonwealth Games in Australia in 2018.

Sanjita has declared that she is innocent and has never taken any anabolic substances.

She said her sample test result was conveyed to her while she was training for the Asian Games at Shillaroo, Himachal Pradesh, and had to leave the camp midway.

In the wake of the allegations, the women’s vigilante group of Peechu Lampak, Thongju Kendra, has also extended their support to the weightlifter.