Samujjal lashes out at former comrade Sarbananda, asks him to break silence

AASU advisor Samujjal Kumar Bhattacharyya on Tuesday trained his gun on Assam CM Sarbananda Sonowal, his one-time comrade, for his silence on the contentious Citizenship Bill. 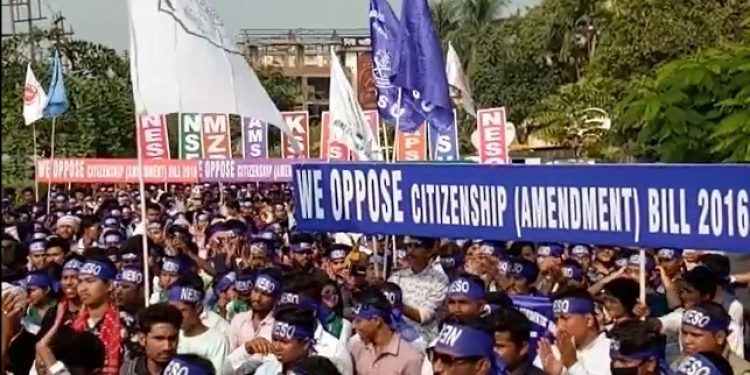 AASU advisor Samujjal Kumar Bhattacharyya on Tuesday trained his gun on Assam CM Sarbananda Sonowal, his one-time comrade, for his silence on the contentious Citizenship Bill.

“We would like to warn the centre and the state government once again on the Citizenship Bill. Assam Chief Minister Sarbananda Sonowal’s silence will not work here. He has to break his silence,” Bhattacharya said addressing a protest rally against the Bill.

The North East Students’ Organisation (NESO), an umbrella body of the students of the Northeastern states, on Tuesday staged protest against the centre’s move to implement Citizenship (Amendment) Bill, 2016 and warned the centre not to impose the bill on Assam.

Bhattacharya said, “The centre does not want to see the northeast in peace and harmony. It has been striving to bring in Hindu Bangladeshis by implementing the bill. Do not impose the bill on us.”

Talking to Northeast Now, NESO secretary general Sinam Prakash said, “The entire northeastern states have opposed the Bill. We all know that the Northeast has been flooded with illegal migrants. We would like to pass a message that the Northeast region is not a dumping ground.”