Bora also sought replacement of the word ‘Sindh’ with the words ‘Northeast India’ as there is no mention of ‘Northeast’ in the National Anthem.

In the resolution Bora stated, “The National Anthem of India ‘Jana Gana Mana’ mentions Sindh which is no longer a part of India.”

He also stated, “The Northeast India, which is a very important part of India, finds no mention in the National Anthem.” 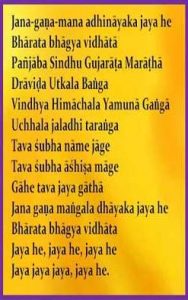 Bora further stated, “The then President of India, Dr Rajendra Prasad, had made a statement in the Constituent Assembly on 24th January, 1950 that the composition consisting of the words and music known as Jana Gana Mana is the National Anthem of India, subject to such alterations in the words as the Government may authorise as occasion arises.”

The Congress MP urged the House to ask the government to amend the National Anthem by deleting the word ‘Sindh’ and replace it with the words ‘Northeast India’ in it.

On his twitter handle, Bora stated, “Today a private member resolution was listed in the revised list of business of Parliament under my name. It was submitted by me requesting to amend the word ‘Sindh’ with the word ‘Northeast (Purvottar)’. As the Sindh province is no longer within the territory of India.”