Assam Chief Minister Sarbananda Sonowal with ministers, officials and forest personnel at the event in Kaziranga on Sunday.

The Chief Minister also distributed ex gratia to the next of keen of victims of man animal conflict and compensation to the injured at programme at Kohora in Kaziranga.

Speaking at the event, he expressed hope that modern weapons would enable the forest personnel to carry out their duties in a more effective manner to protect the state’s wild life from poachers.

Rs 10 crore has also been kept in the 2017-18 budget for purchase of more such arms and equipment in the coming days. 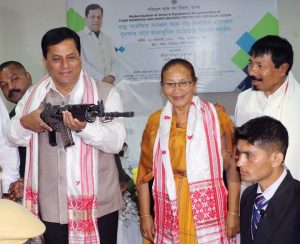 Saying that the local community and particularly the youth must join hands with the government to keep surrounding areas of Kaziranga National Park clean, the Chief Minister stated that visitors to the park must take away a good impression of the state and its people and he called on the forest department to win the trust of the people through dedication and sincerity.

Referring to the difficult conditions that the forest guards and frontline workers of the department have to operate in during floods, Sonowal assured of taking steps to solve their grievances in a phased manner.

He also said that the bad reputation earned by the department due to tainted officials must be removed by hardwork and determination of the employees of the department and trust of the people of the state must be won back.

He also directed the Forest Minister along with Water Resource Minister Keshab Mahanta and Agriculure Minister Atul Bora, who are the local MLAs of Kaliabor and Bokakhat constituencies where majority of the Kaziranga National Park falls, to identify a suitable location for building a heliport nearby the park for increasing tourist flow.

Sonowal also called upon the civil society to join hands with the government in sustaining Kaziranga which is known worldwide as the habitat of famous one horned rhino.

Highlighting the government’s commitment to protect the wildlife and forests of state, he said that 10 Wildlife Fast Track Courts have been set up in the state for speedy proceedings against poachers and wildlife criminals.

The Chief Minister also directed the forest department to devise mechanism for enabling more youths near Kaziranga and other reserve forests and sanctuaries to earn better livelihood through tourism.

He also urged the department to work dedicatedly to stop illegal felling of trees and ensure supply of construction materials for infrastructure development projects.

Forest and Environment Minister Pramila Rani Brahma said that number of initiatives have been taken to protect the rhino and other wild animals of the state and reconstitution of Anti-Rhino Poaching Task Force is a step in that direction.

Following the direction of the chief minister food and medical treatment were provided to the wild animals in KNP during floods last year and steps have already been taken for aerial survey of the park by drones, she added.

Modern arms would be enable the forest guards to protect the wildlife and forests of the state more effectively, she opined.