Revealed! Forcible reconversion to Hinduism from Christianity in Tripura 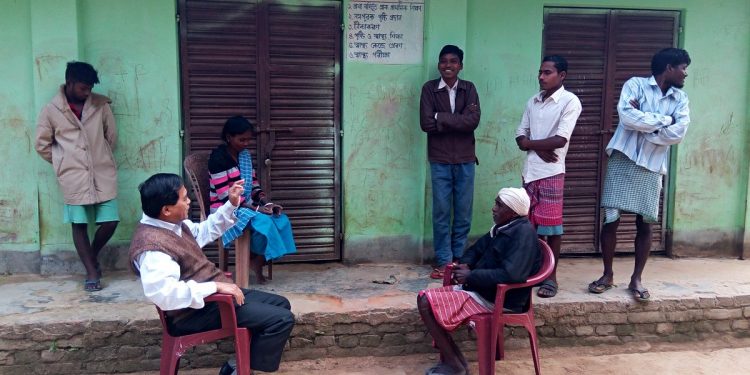 Lok Sabha MP Jitendra Choudhury interacting with locals during his visit to the village at Kailashahar on January 29, 2019. Image courtesy: Twitter @Jitendra1958

Days after around 98 Christians were ‘reconverted’ to Hinduism in Tripura, member of parliament from East Tripura Lok Sabha Constituency and chief whip of CPI-M in Lok Sabha,  Jitendra Chaudhury visited the Ranchi Tilla at Kailashahar on Tuesday and interacted with the villagers.

During the interaction, the villagers disclosed that those were instrumental in the conversion happened to be BJP-RSS workers.

The villagers also said that they were target of ‘ghar-wapsi’ by the saffron brigade on January 20 last.

They said they are trapped, psychologically pressurized and ‘their heart is crying since’ the conversion.

Notably, as many as 98 Christians from 22 tribal families who were reconverted to their original religious faith Hinduism through a yajna.

The Rashtriya Swayamsevak Sangh (RSS), known as the driving force of the Bharatiya Janata Party (BJP) has launched its contagious ‘ghar wapsi’ campaign across Tripura.

The incident has taken place at Kailashahar in northern Tripura’s Unakoti district.

Northeast Now has already reported that a local Hindu Jagaran Mancha leader Manimoy along with Gayatri Kunja, a local Hindu outfit, organized the conversion ceremony to help the people of Kablipura Ranchitilla to return to their original religion ‘Sanatan dharma’ after they wished for it.

Manimoy had alleged, “Taking advantage of their illiteracy and poverty, the tea tribe people were converted from Sanatan religion to Christianity.”

The yajna was conducted by Chandrakanta Singha, president of Gayatri Kunja.

The reconverted people are workers of the Sunamukhi Tea Estate at Jalai and they belong to the Orao and Munda tribes.