In the tribal region, education and empowerment should come first then only can we have an effective MeToo movement: Arunachal scholar Ngurang Reena

Continuing with the dialogue on #MeToo and its movement in India, First Post, an online media portal in its series of conversations, organised a Facebook Live online discussion about #MeToo movement and its inclusivity on Monday.

The discussion which was moderated by Divya Kandukuri, co-founder of EverydayCasteism, had women rights activists and leaders from the marginalised and unrepresented sections of the country such as Rising Flame Founder-Director Nidhi Goyal, Jawaharlal Nehru University (JNU) research scholar Ngurang Reena and Christina Thomas Dhanaraj from DalitWomenFight as the panelists. 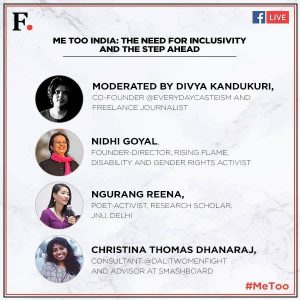 The participants during the Facebook Live discussed on the need for inclusivity in the movement and how to ensure it. Although a commendable movement, they agreed on how it hasn’t reached to the rural areas and tribal areas.

Ngurang Reena who represented Arunachal Pradesh and the North East region said, “I look at #MeToo movement as a revolution and we all need to support one another. Things like this should be gender neutral as anyone could be a victim of power and lust but living in a patriarchal society, it takes pain and time to speak up as women. When we are doing it now let’s talk and support each other.”

Referring to Arunachal Pradesh, Reena added, “In the tribal region, education and empowerment should come first then only can we have an effective MeToo. I hope we can have such revolution here soon.”

Ex-gratia of Rs 500 under PMGKY will be disbursed among pensioners: Manipur minister

#CheckeTheFake-9: More subscribers and viewers than COVID19 patients in hospitals