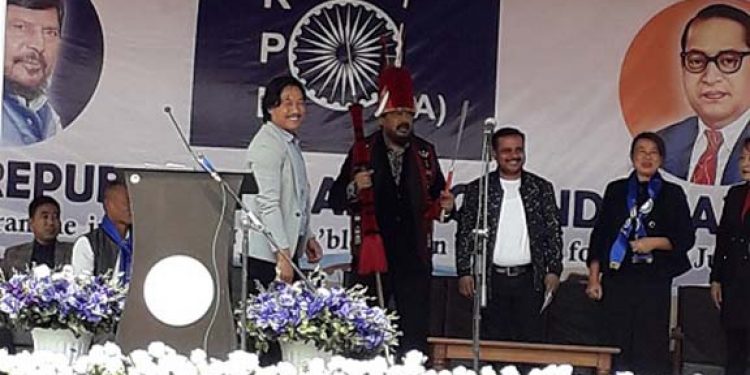 Republican Party of India (Athawale) president and union minister Ramdas Athawale in Naga traditional attire during the launch of the Nagaland unit of the party at Dimapur on Tuesday. Image - Bhadra Gogoi

Union minister of state for social justice and empowerment Ramdas Athawale, who is also the national president of Republican Party of India (Athawale), officially launched the party unit at a brief programme and announced names of its office bearers.

“Mughato Aye will lead the party as its president in Nagaland,” said Athawale.

Athawale said Republican Party of India, founded by the main architect of the Constitution, stands for all the weaker sections of the society such as SC, ST, OBC and even the economically weaker section of the general category people for whom the party pushed for reservation recently.

The union minister assured of making available the various welfare schemes under his ministry to the people of Nagaland.

Noting that Nagaland lacks proper roads, Athawale hoped the commuters can travel with ease from Dimapur to the state capital Kohima in one hour with the completion of the under-construction National Highway 29. The 75 km distance between Dimapur to Kohima normally takes around three hours now.

He also felt that the state needs investments from big companies of the country in the form of setting up of industries to generate revenue and employment for the local youths.

Athawale said he met chief minister Neiphiu Rio and deputy chief minister Y. Patton in the morning on Tuesday and deliberated on development issues of the state with them. He said he has invited Rio to Mumbai to discuss investment by big business houses from outside the state.

During his maiden visit to the state, the minister also met Governor P.B. Acharya at Raj Bhavan in Kohima on Monday afternoon.

Athawale was scheduled to visit Mon for distribution of appliances for empowerment of persons with disabilities under the RVY scheme on Monday but bad weather prevented his chopper from landing there.

Addressing a press conference later at the Raj Bhavan on Monday evening, he said wheel chairs were distributed to the people with disabilities in his absence in Mon.

Saying that there are more than two crore persons with disabilities in the country, the minister said the central government is fully supporting the disabled people.

On the controversial Citizenship (Amendment) Bill, Athawale said his party supported the Bill when it was passed in Lok Sabha. He, however, said the central government should respect the sentiments of the people of North East India.