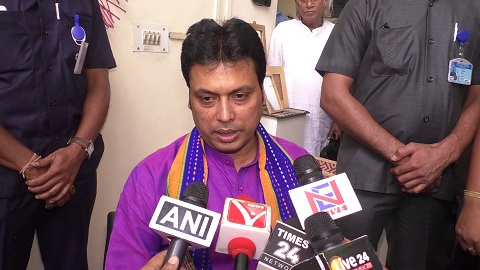 Deb, who is also the BJP state president did not bring any specific allegation against Roy Barman but viewed that party and organization is always above any individual or leader and after getting post one should not forget that.

On the former minister’s comment after getting removed that he has been working hard for the departments which were allotted to him and the public was happy with his performance but for some reason, he failed to satisfy the chief minister, Deb told reporters in Agartala, “It is a different issue individually who will satisfy whom rather the public, party and the organization should be satisfied with one’s activity. See, I belong to a party, organization and only after that I could be a public leader but even four years back as an individual who knew me? I was born in this state on November 25, 1971 at Jamjuri, studied at Udaipur College, Ramesh School but who use to know me, none. Today people know me only because of my party and organizational work. After that, the people of Banamalipur voted and made me their MLA and send me to Assembly. The party selected me as the leader and gave me organizational responsibility. Now if I forget my party and organization, I will be nowhere.”

On Roy Barman’s allegation that he was not provided with any show-cause notice the chief minister said, “I do not have any information on whether the constitution has any such provision that a showcase notice has to be provided, hearing it for the first time.”

It may be recalled that two days back the state health and family welfare minister Sudip Roy Barman has been removed from chief minister Biplab Kumar Deb-led ministry of the 15-month-old BJP-IPFT government in Tripura.

Barman said that people of the State love him for his sincerity and honesty but he repents that he couldn’t make his chief minister happy by his performance.

It is assumed that on allegation of ‘anti-party activities’ Roy Barman has been removed from the ministry despite his performance as a minister.