Girls students taking part in a protest rally taken out by AASU in Guwahati. (File photo)

Satra Mukti Sangram Samiti (SMSS) activists on Saturday burnt effigies of Education Minister Himanta Biswa Sarma at different parts of the state while in the national capital students of Jawaharlal Nehru University (JNU) on Friday participated in a protest march carrying a banner  that read, “The nation is going to the dogs and you are dancing Bihu.  Save Assam Women’s University.” 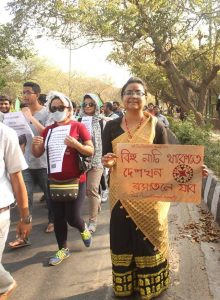 Seven office bearers of SMSS and one of Gauhati University student were arrested on Saturday in Guwahati for protesting against Sarma’s proposal to downgrade the University to a Technical University and stating that the degrees of the students were of no use as the University did not have a permanent vice chancellor since its inception in 2014.

Gogoi said that his party would take up the cudgels on their behalf.
Gogoi admitted that he was also to blame as it was during his tenure that the University Act was passed in the State Assembly but Sarma was the one who had justified the setting up of the University.

“His u turn was to be condemned as he should have implemented all the steps to establish the University as a full-fledged one with a permanent vice chancellor,” Gogoi said.

He further said that Sarma as education minister was not the one to decide on what should be done to this University but the chief minister as chancellor had more say in the matter.

In a separate press meet Rana Goswami said that an educational Institute for women should not become a casualty of political machinations and no one should play the game of one upmanship especially when the future of more than 700 students and ex-students was at stake.

Social activist Irom Sharmila from Manipur,   actor Prastuti Prashar and organizations like AIUDF and the Birsa,  Ambedkar,  Phule  Students’ Association (BAPSA – CUG) and United OBC Forum-CUG also extended their support through various media, condemning the irresponsible and gender insensitive statements of the politicians and the government.

Abikal Bora, doctoral student at Texas Austin University, USA and emerging Assamese writer through a video clip in support of the AWU students’ demands said that the issue should be seen in context of successive governments decreasing the budgetary allocation for education over the years, indicating how serious the Centre was in this regard.

He pointed out that in 2013-14 during the USA government in the Centre the Education allocation was only 4.5 per cent of the total budgetary allocation and during the BJP rule in 2016-17 and 2017-18 this was brought down to 3.65 per cent and 3.71 per cent respectively of the total.

The AIUDF memorandum signed by MPs Badraddin Ajmal and Radheyshyam Biswas and MLA Hafiz Bashir Ahmed to Ram Nath Kovind, president of India sought a review of the matter.

The SMSS has demanded immediate release of all seven activists.