Khandu assures of bringing in more reforms, work dedicatedly for the state to take it to newer heights 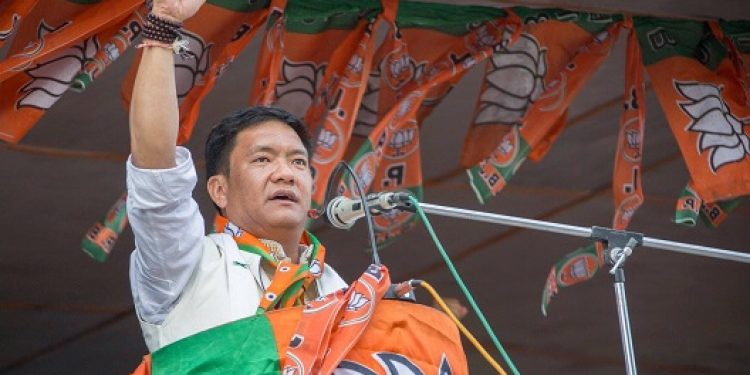 Arunachal Pradesh chief minister Pema Khandu has thanked the people of the state for reposing faith in the policies and performance of his government and making the BJP the single largest party with 41 MLAs.

Khandu in a statement released on Saturday also thanked the people of the state for electing two BJP MPs from the state with massive win margin to strengthen the hands of Prime Minister Narendra Modi.

“It is Narendra Modi’s good governance and policies that ignited minds of our people and they openly voted for development and voted for ‘Phir Ek Baar Modi Sarkar’,” the chief minister said.

Dedicating the massive mandate to the people, the karyakartas and party leaders Khandu said, it is for the BJP’s ideology of development, a strong and stable leadership in the Centre under the dynamic leadership of Prime Minister Modi and party chief Amit Shah that Arunachal could record a cent percent win in the Lok Sabha elections and landslide victory in the Assembly polls.

“I and my colleagues realize that we have been given a sacred duty of working tirelessly towards turning the aspirations of the people of the state into reality,” said Khandu.

“Taking the goals of development to each and every section of the society and every nook and corner of the state remains a big responsibility, we are committed to achieve this goal and transform Arunachal Pradesh in all spheres,” he added.

He also thanked each and everyone for the achievements of the outgoing government and vowed to continue working for Arunachal with even more vigor and dedication.

He assured of bringing in more reforms, work dedicatedly for the state to take it to newer heights.

While congratulating all the winning candidates and accepting the people’s verdict with utmost humility, Khandu stated that a strong, stable and committed government is in place now which will leave no stone unturned to ensure that the state achieves unprecedented heights of all-round development.

“People’s mandate for development shall be our guiding light in all the policies of the new Government,” Khandu said.