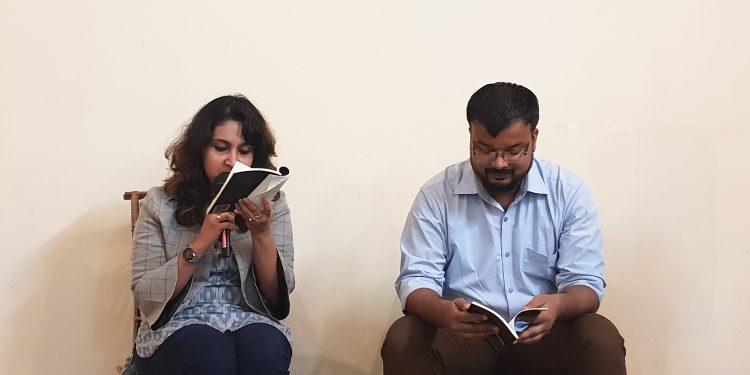 Poets Namrata Pathak and Shalim M Hussain taking part at the event in Guwahati on Sunday.

A “Poet reads Poet” programme was organised at ‘NEthing’ in Guwahati on Sunday evening in which Namrata Pathak read out from Shalim M Hussain’s latest poetry collection “Betel Nut City,” with the latter responding to her queries in between the verses.

Shalim is a multi-talented personality. Earlier, he was selected for the ‘India Foundation for the Arts’ grant 2017-18. The grant was sanctioned for four short films on ‘Nau Khela’, ‘Lathibari’, and ‘KobiBayat’, three performative arts from the char-chaporis of Assam and ‘Gasshi Rati’, a semi-religious ritualistic performance.

Hussain, who hails from Sontoli village in Assam’s Kamrup district has been working on the literature and culture of the char-chaporis (river islands of Assam) for a long time.

In 2010 he co-directed a short documentary film on ‘Lathibari’ and has been instrumental in founding a protest movement that has been given the name ‘Miyah Poetry’.

He is one of the founders of Itamugur, an art collective that is focussed on promoting the literature and art from the char-chaporis of Assam.

Shalim’s latest book consists of 46 poems divided into seven categories covering diverse issues and subjects that is evident from the names of the poems, such as, “Nana’s New Clothes”, “Standing by Abba’s Grave”, “At the Counsellor’s Office”, “Saraswati Puja”, “Ganeshguri” and “Jalukbari”.

On being asked what inspires him to write and whether he prefers prose over poetry, Shalim stated, “I think that the desire to tell stories inspires me to write. I use both prose and verse but the impulse has always been to tell stories. However, I choose the medium based on the story I want to tell. If it’s deeply personal or anecdotal, I prefer poetry.”

According to him, if the story is based on characters, he would prefer the short story. However, this is highly tentative and occasionally he would start writing a story in verse and if he thought that it’s better suited for prose, he would make a detour.