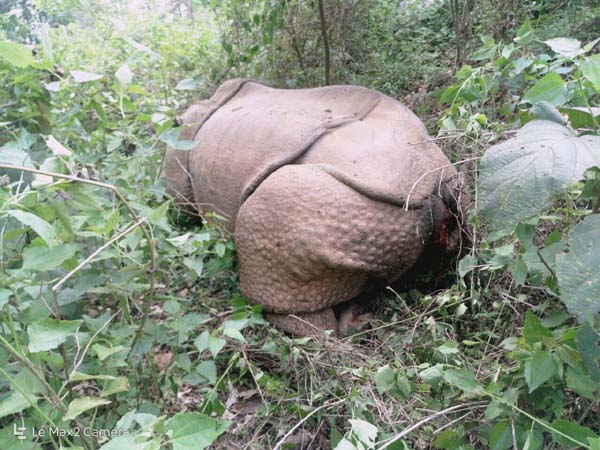 The full ground adult male rhino have been killed by the poachers at Chirakhowa anti poaching camp near Brahmaputra river bank of the National Park where poachers chopped of its horn, forest officials said.

Divisional Forest Officer Rohuini Ballav Saikia informed that the poacher’s chopped its horn. The rhino which was a 30 years old male had several bullets holes.  Saikia also informed that 24 rounds of empty bullets from AK series rifle have been recovered from the spot.  Two rounds of bullets wounds was found in the rhino’s body.

The incident happened in an open area of Brahmaputra river bank which is flooded during monsoons and is an easy escape for the poachers, a source said.

Sniffer dogs were used to find clues for this incident, Saika said.

A massive search operation was organized this morning jointly under Special Task Force STF, police  and forest officials inside the park and its boundary areas,  Saikia said .

On May 4  police arrested Parci Rongfar 45, a most wanted poacher from Natun Danga under Jakhalabandha police station in Nagaon district and recovered one .315 rifle and 18 rounds of live ammunition from Anjukpani in Karbi Anglong district which was hidden by the poachers .  He was the mastermind behind the several poaching incidents in the national park.  He  used to help his Manipuri counterparts kill rhinos inside the park .