PDF lashes out at Meghalaya BJP over central scheme

Meghalaya is not a personal asset of any political party, says PDF leader 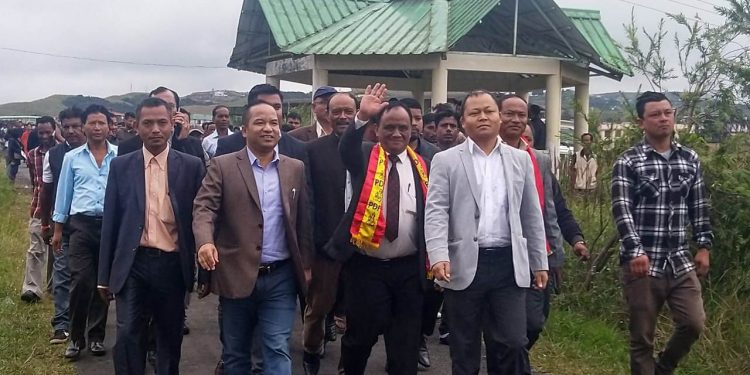 Taking a dig at the Meghalaya BJP, the People’s Democratic Front (PDF) on Thursday said that the state of Meghalaya is not a personal asset of any political party.

“The state of Meghalaya is not a personal asset of any political party. Schemes and projects proposed by the state government to the Centre have to come to the state,” PDF leader and urban affairs minister Hamletson Dohling said.

Both the PDF and the BJP are partners of the NPP-led Meghalaya Democratic Alliance (MDA) government.

Dohling was reacting to the claim of BJP legislator Sanbor Shullai who stated that all central schemes for Meghalaya before approving by the Central government should be first scrutinised thoroughly in consultation with the state BJP.

Shullai who was campaigning for BJP candidate, Joshua Warjri for the bye election to Shella Assembly constituency, said that a monitoring and implementation committee would be formed to ensure that those central schemes are implemented and prevent from going to somebody’s pocket.

Shullai also urged the people of Shella constituency to vote for the BJP candidate so that financial assistance for the development of the constituency will reach directly from Delhi.

Dohling said that leaders should not fool people by making all sorts of statements in the name of development.

The PDF is fielding Mosjo Wanswet, the younger brother of Leston Wanswet, the contender who had not won the elections from Shella constituency and lost by narrow margins in Assembly polls held in the past 15 years.

Mosjo is relying on his elder brother’s support in this upcoming bye election.

The bye election to Shella constituency is necessary after the death of assembly speaker and sitting MLA Donkupar Roy who had represented the constituency for seven terms since 1988.

The NPP is supporting Roy’s eldest son Balajied Synrem, who is the candidate of the United Democratic Party (UDP).

Dohling admitted that Leston has an important role to play for the PDF candidate in this bye election.

“Though Leston is with the NPP, but his supporters have agreed to support the PDF candidate in this bye election,” Dohling said, while exuding confidence that the PDF will win this bypoll.