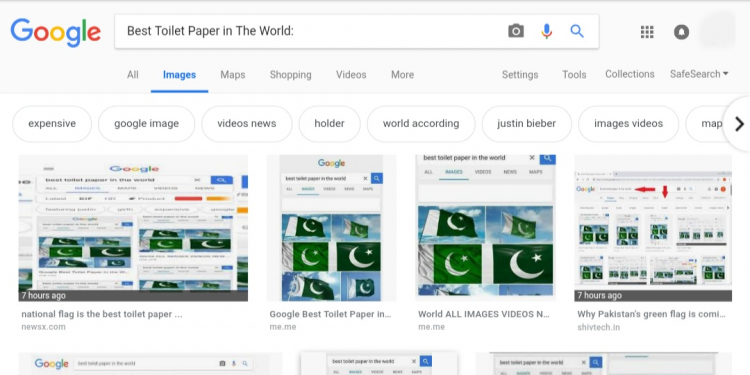 According to Google, Pakistan’s flag is the ‘best toilet paper in the world’!

Images of Pakistan’s national flag will pop up in Google’s image search when one types ‘best toilet paper in the world’ in the search engine.

Without wasting any time, several people have shared the screenshots of the Google image result on Twitter, making the hashtag #besttoiletpaperintheworld trend on the micro-blogging site.

The incident surfaces just after the deadly terror attack that killed 44 CRPF personnel in Jammu and Kashmir’s Pulwama district on February 14 inlcuding one jawan Maneswar Basumatary hailing from Tamulpur in Baska district of Assam.

Pakistan-based terror group Jaish-e-Mohammad claimed the responsibility for the attack.

The well-planned attack used a vehicle-borne improvised explosive device to target a CRPF bus that was part of a 70 vehicle convoy.

The convoy was on the Srinagar-Jammu highway and was on its way to Pulwama when a suicide bomber belonging to the terrorist organisation Jaish-e-Mohammad drove an explosive-laden SUV into the bus.