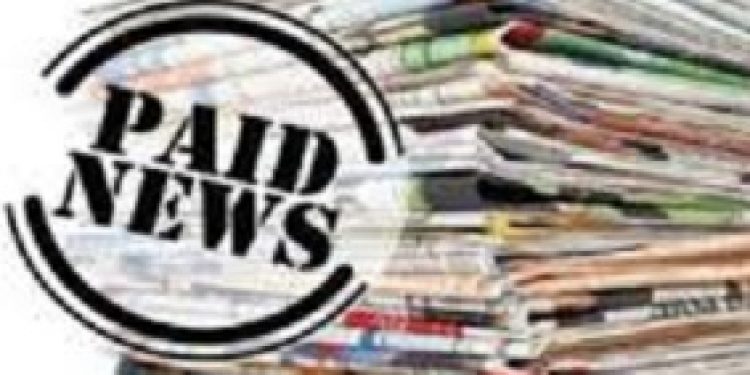 Indian media can truly boast of its responsible role in nation building.

The media, especially newspapers in India led the people emotionally and intellectually to oppose and banish the British.

In post independence era, Indian media helped democracy to take root, to grow and flourish on it’s soil.  But of late, democracy itself is in threat from the same media, especially during elections.

The phenomenon called ‘paid news’, like yellow journalism, is beginning to corrode the very system of participatory democracy besides corroding the credibility of media itself.

Editors’ Guild made vociferous protests against paid news after the 2009 Andhra Pradesh elections. Noted journalists late Kuldeep Nayar, Ajit Bhatacharjee, Harivansh Narayan Sing, B G Vergeese, and members of various organizations put pressure on the PCI to act decisively against sections of the media personnel indulging in the harmful practice.

Noted journalist Prabash Joshi and Palagummi Sainath wrote vigorously against prevalence of paid news in Indian media. Rajdeep Sardesai led a team of journalists to the then Chief Election Commissioner Navin Chowla and urged him to take strong action against candidates and media persons who indulge in violating media ethics.

Under this circumstance, Election Commission of Indian (ECI) resolved to curb the serious malpractice called ‘ paid Nnws’.  The ECI  feels paid news not only  violates  the sanctity of freedom of speech and expression enshrined in Article 19 (1)of the Constitution  but also  pauses a serious  threat to our parliamentary  democracy by unjustly furthering electoral prospects of  some  candidates in elections  while ruining others.

Paid news, according to Press Council of India, is –“Any news or analysis appearing in any media (print and electronic) for a price in cash or kind as consideration.”

It is a systematic engagement of media outlets to publish favourable news items, articles and biased stories in newspapers and TV channels for money. Biased coverages, advertisements camouflaged as news favouring select candidates while denying coverage to some others are rather common practices now a days.

ECI proposed to the Government of India to amend the Representation of the Peoples Act, 1951 related to conduct of elections to the Parliament and the Assemblies, qualifications and disqualifications for membership of these Houses, corrupt practices and other offences in connection with elections. It insists incorporation of paid news as an electoral offence and punishable for a minimum of two years of imprisonment.

While ECI has been actively contemplating  stringent measures against paid news which has assumed a serious proportion ,the political parties in India  also arrived at a consensus with ECI that  all media be put through  maximum vigilance  on the eve of Lok Sabha and Assembly polls. In meetings held between October 4, 2010 and March 9, 2011, the political parties and ECI resolved to adopt various measures to prevent paid news.

PCI constituted a 12-member drafting committee to  prepare a final report on the findings of select committee on the phenomenon of paid news.

The Press Council of India  made a series of  guidelines for the media ; inter-alia, (a)objective reporting about elections and  the candidates , (b) eschewing news reports which tend to promote enmity and hatred among the people on grounds of caste, creed, religion, community or language (c) refraining from publishing false or critical statements regarding personal character and conduct of any candidate, (d) refraining from accepting any kind of inducement  in cash or kind to project a candidate or party, (e) not indulging in canvassing for a particular candidate or party, (f) the press shall not accept or publish any advertisement  at the cost of public exchequer (g) The press shall observe  the directions/orders/instructions of ECI.

Ashok Chavan, former chief minister of Maharastra was questioned by ECI in 2010 allegedly for funding publication of news items camouflaged as advertisements highlighting his achievements prior to 2009 Assembly Elections in the State and for not showing his election expenditure properly. One Deepok Chourasia was accused of being a promoter of paid news. About 1500 cases of paid news were reportedly identified during elections held between 2009-2013. Big and reputed media houses have been put under the scanner by ECI. Bennett Coleman and Co Ltd, owner of The Times of India, was criticized by many allegedly ‘for dismantling the walls between newsroom and sales department’.

Election Commission detected 313 cases of paid news in Assembly elections in four states of Haryana, J&K, Jharkhand and Delhi in 2014, Commission served   3053 notices and 694 of which were found to be genuine during the same year.

Every citizen knows what is news and what is canvassing in the guise of news. Impartiality in both print and electronic media in election weather becomes a victim of concocted news and   unsavory views. There is no systematic measure to curb such harmful practices with the media houses also.  Few media Houses in the country send written guidelines to reporters prior to an election not to take side while covering election related matters.

A serious hurdle to healthy journalism in the country today is that the media houses are owned by big political leaders and business men who use them to gains political mileage and money. Some turn their apparatus into propaganda machines.  The electronic media can be more dangerous when it chooses to go biased. We have observed with indignation that some news channels broadcasting in regional  languages  in Assam are blatantly  biased .

For example, in the run up to the  coming April 11  Parliamentary Elections in Assam, some news channels have been adopting an angle of coverage which is diagonally  opposite of some others owned by rival political party leaders  to the utter confusion of viewers who are not adept in reading between the lines.

MCMC will report it to the returning officer and the election observer (expenditure) on day to day basis once the model code of conduct for the election comes into force.  When MCMC  confirms that a news matter, news bulletin or  an advertisement  falls into that category, the same should be sent to the expenditure accounting cell for fixing the amount to be recorded in shadow registrar against the concerning  candidate.

The returning officer would send notices to the concerning candidate within 24 hours why the particular news matter or advertisement be not considered a paid news and the expenses included against him in the shadow register.

It will  indeed take some time more for the new specifications regarding paid news to percolate down to the scribes in the field of this vast country and once they will be received in real earnest by all associated with the noble profession, the socio-political scenario will definitely be far better that what it is today.