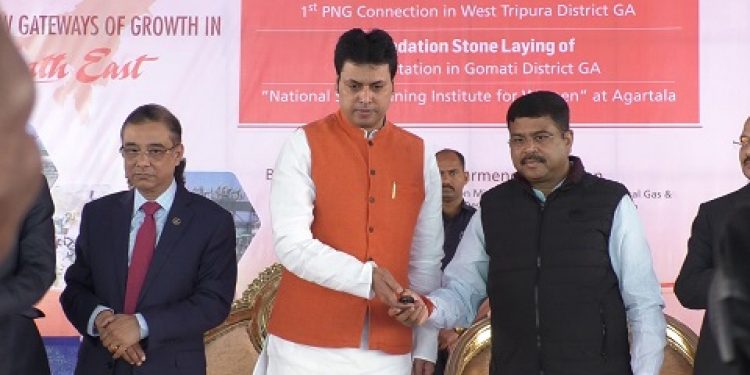 Union Petroleum and Natural Gas minister Dharmendra Pradhan on Saturday inaugurated and laid the foundation of several oil and gas projects in Tripura.

Pradhan said ONGC can play the most vital role in transforming the State and thus help in making a ‘New India’, the dream of Prime Minister Narendra Modi.

Addressing the gathering, Union minister Dharmendra Pradhan declared that on date ONGC Tripura Asset with the production of 4.96 MMSCMD gas per day which is higher production in not only its history but also the number one gas production point in the country.

However, he felt that the target is to go up to 10 MMSCMD per day.

Pradhan said that Northeast is the energy storehouse in the form of huge quantity of crude oil or natural gas found in this region and the centre at a cost of Rs 2000 crores has formed a company Indradhanush which is connecting all the eight north-eastern states by gas pipeline.

The Union Minister said that an LPG bottling center is coming up in the outskirts of capital Agartala and to avoid the uncertain hilly route from Guwahati, the India government has got it cleared from the Bangladesh government to bring LPG through the Chittagong port so that there is a steady supply of LPG to Tripura round the year.

He added that in addition to this 40 more LPG distribution centers and 150 fuel filling centers are going to come up in Tripura.

The Union Minister also declared the setting up of National Institute of Skill Trainer in Tripura at the cost of Rs 16 crores for the enhancing the income of the women section, especially in the SHG and household bamboo handicraft sector through advanced training.

The Petroleum and Natural Gas minister said that Prime Minister Narendra Modi is committed towards improving the standard of living for the people of North East especially Tripura and in coming days the region will be one of the developed and business hub of the country.