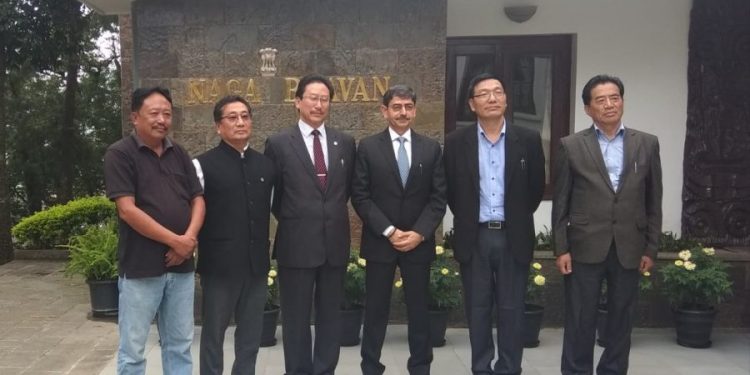 A delegation of the Naga People’s Front (NPF) called on the newly appointed Nagaland Governor R N Ravi to congratulate and welcome him on Wednesday.

This was stated in a press statement issued by the press bureau, NPF central headquarter.

It stated that during the meeting, the NPF delegation expressed hope that an amicable and acceptable solution to the Naga political problem would arrive soon under the able initiative of the Governor.

The NPF delegation which was led by its secretary general, K G Kenye also expressed that the dual charge of Ravi as interlocutor and the Governor should not contradict and hamper the ongoing political dialogue.

The delegation also said rather it should facilitate more in expediting the solution at an early date.

The delegation also briefed the new Governor that during 1964, when the first cease fire agreement was signed, the regional NPF party legislators had resigned from the Assembly to pave way for a peaceful solution.

And in the second cease fire agreement which took place in the year 1997 between the NSCN (IM) and the Government of India, the NPF party on the call of the Naga Civil societies in 1998, boycotted in participating the election expecting the Centre to hear the cry of the Naga people.

Therefore, the NPF reiterated to the Governor that it avowed its stand that the Naga political problem as the top most priority for the party and is ready to pave way for any new arrangement for the welfare of the Naga people.

It meanwhile asserted that the party would extent full cooperation for any peaceful and amicable settlement to the vexed Naga political problem and for which the solution is in sight.