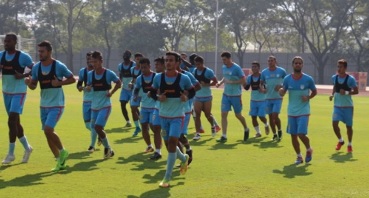 An early goal from the boots of caretaker coach and captain Robbie Keane helped ATK defeat NorthEast United FC 1-0 in their concluding league clash of the Hero Indian Super League on Sunday. With this defeat, the NEUFC finished at the bottom of the league.

Having struggled to replicate the good performance of the previous seasons, two-times champions ATK needed a win to avoid a bottom-place finish, and Keane’s well-taken goal in the 10th minute ensured that. As for NEUFC, it was yet another night where things could have gone their way.

After a sluggish start to the game, ATK went ahead with the first good bit of play in the game. In the 10th minute, Conor Thomas put in a delightful ball over the top of the defenders to pick up Robbie Keane, who brought it down before poking it past goalkeeper TP Rehenesh.

Shortly after going a goal down, NorthEast had the ball in the back of the net courtesy John Mosquera but it was ruled offside. NorthEast kept piling on the pressure on ATK for most part of the first phase of play. In the 36th minute, Mosquera should have put the visitors on level terms after being put through on goal by Helio Pinto. The Colombian forward, however, delayed taking his shot, giving goalkeeper Soram Poirei an opportunity to block his effort, reported the news mill.

In the second half, both sides made a slow start. At the hour mark, ATK came close to doubling their lead after Sibongakonke Mbatha made a darting run inside the NorthEast penalty box, but his effort went just wide of the goal. At the other end, the visitors failed to create the chances they had managed to do in the first half.

In the final moments of the match, NorthEast close again. Marcinho’s 87th-minute freekick looked destined to be headed in by Danilo Lopez but the forward somehow failed to connect, which summed up the season for the Highlanders.