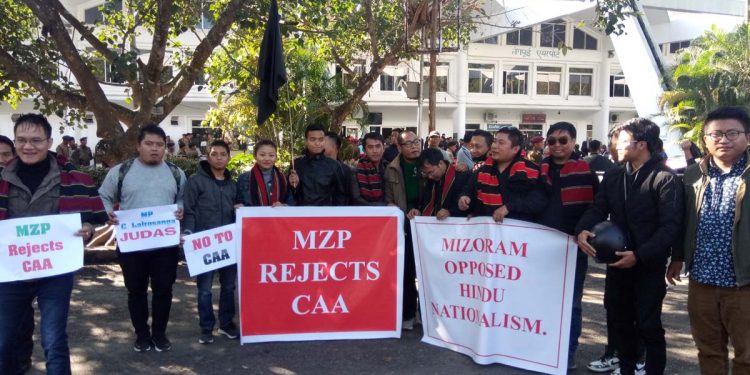 The MPs from Nagaland, Mizoram and Tripura have either faced outrage or suspension from the party for supporting the amended citizenship law.

The NPF, the main opposition party in Nagaland, on Wednesday suspended its Rajya Sabha MP Kenye from the party for voting in favour of the CAA.

Kenye, however, said that he voted in favour of the amendment bill as it exempted Nagaland because the Inner Line Permit (ILP) regulation has been in force in the state.

On Tuesday a large number of MZP activists staged a demonstration at Lengpui airport and waived black flags at Lalrosanga as he arrived at the airport from Delhi.

The opposition Congress, demanding Lalrosanga’s resignation, called him a “traitor” for voting in support of the CAA.

Meanwhile, the ruling BJP’s ally in Tripura, the Indigenous People’s Front of Tripura (IPFT), continued its indefinite sit-in for the fifth day on Friday.

Braving the cold weather, several hundred activists including women led by the leaders of the IPFT, continued their demonstration in Khumulwng for keeping the state out of the purview of the CAA and for the creation of a separate state for the tribals.

In Assam, Rajya Sabha MP Birendra Prasad Baishya, who belongs to Asom Gana Parishad (AGP), faced flak for voting in favour of the CAA in the upper house of the parliament.