The full rehearsal of the Republic Day parade at Rajpath in New Delhi witnessed an All-woman bike contingent, to be showcased for the first time on January 26 next, which have riders from three north-eastern states of Assam, Manipur and Meghalaya. 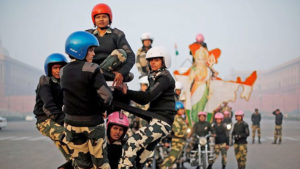 The all-woman biker contingent ‘Daredevils’ of the Border Security Force (BSF) will perform for the first time at the 69th Republic Day parade which have riders from three north-eastern states of Assam, Manipur and Meghalaya.

The BSF has trained 113 woman bikers, who will be riding on 26 350-CC Royal Enfield motorcycles to perform acrobatics and stunts.

Significantly, the team comprises members from almost every state in the country. The largest number, are from Punjab (20), followed by 15 from West Bengal. Ten are from Madhya Pradesh, nine from Maharashtra, eight from Uttar Pradesh, seven each from Assam and Bihar, six from Odisha, five each from Rajasthan, Manipur and Gujarat, three each from Jammu and Kashmir and Chhattisgarh, two each from Karnataka, Uttarakhand, Delhi and Kerala, one each from Meghalaya and Himachal Pradesh.

The bikers, in the age group 20 to 31 years, led by Sub-Inspector Stanzin Noryang, 28, from Ladakh, will perform stunts displaying a mix of India’s military might and cultural prowess.

The idea is the brainchild of BSF Director General K K Sharma, who had the desire to replace men daredevils with women bikers.

Assam tableau: The tableau from Assam to represent in this year’s Republic Day parade in the national capital also joined the full dress rehearsal on Tuesday.

The theme of the Assam tableaux this year is Majuli with the ‘Mukha Silpa’ or the art of mask making unique to the river island, Majuli commanding the spotlight.

The mask dance performer is also known by its popular name ‘mukha silpi’ in Assam.

Ten mask dance performers from Samaguri in Majuli will perform at the Republic day parade under the guidance of Hem Goswami. The Ministry of Defence had given its approval for the theme after several trials.

The ten performers will render the Bhaona scenes atop the tableaux.

The front display of the tableau has been designed with huge Narsimha depicting Agnigarh, the gate under which the actors will enter the arena.

The lower portion of the tableau and the sideways are designed with different masks which will also be used while performing different characters of the epic plays.

The central portion of the tableau will showcase Sita Haran and Bali Badh Bhaona which will be performed by the artists wearing different masks resembling the characters. The rear view of the tableau will be a symbolic representation of Kamalabari Satra.

In addition to that, the pillars of the tableau showcase the traditional Assam Garuda perched on one of the pillars.

Earlier in 2014, the Assam tableaux with music maestro and balladeer Bhupen Hazarika as the theme had bagged the second prize while in 2016, the tableaux with Rongali theme got the third prize at the Republic Day parade in those years.

This year along with Assam, 23 more tableaus – 14 from various state governments, 7 from various central ministries and 2 from ASEAN countries will participate.

Tripura tableau: This year the famous ‘Bizu’ dance of the Chakma tribe is featuring in the official tableau of Tripura.

It is indeed a proud moment for the 2.26 lakh Chakmas residing across India that their traditional dance form from the north-eastern state of Tripura. This popular form of dance is characteristic of the Chakma community. Bizu means ‘Chaitra-Sankranti’. ‘Chaitra-Sankranti’ denotes end of Bengali calendar year. It is during this period when the Chakmas sing and dance to bid good-bye to the year just being ended and welcome the New Year.

Performers will perform the dance which is beautifully orchestrated with the rhythm playing of what is known as ‘Khenggarang’ and ‘Dhukuk’ sorts of flutes.

Manipur tableau: The tableau from Manipur also showcases varied rich cultural and traditional heritage of the State including its heritage dance forms.

The tableau also features the primarily agrarian society of the state. A dance form depicting the eternal tale of Khamba and Thoibi, considered Romeo and Juliet of Manipur will also be presented in the tableau.

On the top in the front depicts a man dressed in traditional attire playing the ‘pena’, a string instrument typical of Manipur.