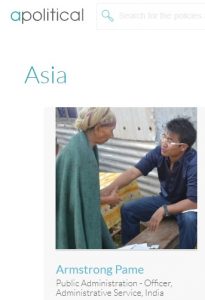 Apolitical, a global network for ‘government, helping public servants find the ideas, people and partners they need to solve the hardest challenges facing our societies’ has come out with a list of 100 most influential young people in government whom it termed as ‘100 Future Leaders’.

Notably, a young bureaucrat from the Northeast has found place in the coveted list, among four others from the entire country.

He is Armstrong Pame, an officer in the Indian Administrative Service (IAS). He is an IAS officer from the Zeme tribe of the Naga people.

Pame who hail from Tamenglong district of Manipur was honoured with the ‘Most Eminent IAS Officer Award’ in 2015.

Pema after completing his bachelor’s degree from St Stephen’s College in Delhi way back in 2005 took the Civil Services Examination in 2007 and cracked the Indian Revenue Service in Custom and Central Excise department.

After clearing the UPSC exam in 2008, he was selected for Indian Administrative Service (IAS).

He is not only acclaimed but has earned the sobriquet ‘Miracle Man’ for building a 100 km road famously known as the ‘Peoples’ Road’ connecting Manipur to Nagaland and Assam.

In August 2012, he raised Rs 40 lakh for this purpose through Facebook page. For his efforts in building road with donation and volunteers he was also invited to Facebook headquarters in California.

In 2012, he was nominated for CNN-IBN Indian of the Year in Public Service category.

Pame was also invited to the talk show ‘Aaj Ki Raat Hai Zindagi’ by host megastar Amitabh Bachchan in 2015 as the ‘hero’ of the ninth episode.

On the show which was aired on Star Plus he could be seen performing the noted song ‘Give Me Some Sunshine’ from the critically acclaimed Aamar Khan starrer movie ‘3 Idiots’ along with Bollywood actor Boman Irani.

Armstrong Pame is also the founding curator of the Global Shapers Community, Imphal hub under the World Economic Forum.

Earlier this year, Pame was also declared as young Global Leader of the class of 2018 as declared by the World Economic Forum.

Notably, the list prepared by Apolitical Drawing was drawn from a shortlisted nomination numbers in hundreds from experts and leading organizations.

Significantly, everyone who have made to the select list are aged 35 years or below.