NEC should play a pro-active role in Northeast: Assam Governor

NEC plenary is an opportunity to review the present and introspect the future for NER development: Assam Governor 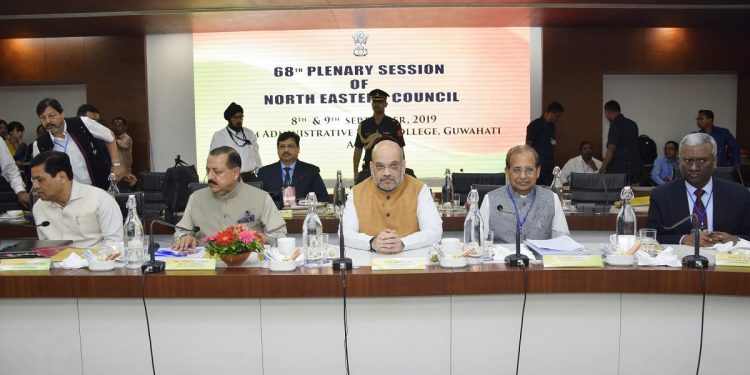 Assam Governor Prof Jagdish Mukhi said that North Eastern Council (NEC) should play a proactive role in undertaking more research work in generating more employment avenues to help the youth of the region to be absorbed in meaningful vocations.

Sharing his observations as the Governor of the State, Prof Mukhi caught the attention of the august gathering and presented a canvas of avenues where NEC can undertake research activities and pump in investment for generating large scale employment avenues in the region.

He said that bamboo is found abundantly in the State and with the new technology and markets emerging for the new bamboo products, it can be commercially exploited with great success.

He also said that tourism, tea industry, handloom and ethnic cuisine are some of the sectors where NEC can fund research to find out prospective avenues to absorb the youth forces.

Thanking NEC for holding its plenary in Guwahati the Governor said, “It is a great opportunity for all the North Eastern States to come together and introspect on the development initiatives taken up in each NE States and augur a conducive atmosphere for future growth.”

“The Council has striven to serve the needs of the North Eastern states through its focus on special circumstances and needs. Despite many constraints, it has assisted in the planning and development efforts of the states of the region,” he said.

“I am positive that the deliberations during this plenary meeting and the decisions reached by the Council would help in achieving even more meaningful contribution towards faster socio- economic development of the North East Region,” the Governor added.

The Governor also put it forward that north-eastern region of the country has the maximum number of international borders apart from its disadvantage of being the land locked region.

Despite all these strengths and weaknesses of the north-eastern region, it should be admitted that the region has enormous potentials to be developed as one of the prosperous regions in the country.

Assam is strategically located in the Northeast and Guwahati is the gateway to the region.

It is needless to mention that any development projects taken up in Assam would as a natural corollary ensure that the benefits accrue to other states as well.

Hence projects having multi-state impact should be given higher priority by the Ministry of DoNER for funding through NEC.

For all round development of the region, support from NEC is of utmost importance.

Therefore, pending any further decision, I would urge upon the Ministry of DoNER and the NEC to continue providing financial assistance to the developmental programmes of the State beyond March, 2020, he said.

The Governor also said that NEC should lay stress on developing connectivity of the region through airways, roadways, railways and waterways.

“I would like to call upon the Ministry to develop trade and economic links since there are close historical and cultural ties between the people of the Northeast and those of the nations of South East Asia in terms of culture, language, history, commerce and environment,” the Governor said.

“These needs to be strengthened by ending the economic isolation of the region through opening of the border trade which will enable development of markets for primary commodities, industrial products and surplus agricultural produce and to facilitate cultural and tourism related interactions with its international neighbours,” he added.

The “Act East Policy” which is an integral part of the NER Vision, 2020 lays emphasis to improve trade ties with Bangladesh along with the countries in the east such as Myanmar, Thailand and Malaysia and this should be brought to its meaningful conclusion, he further added.

Governor Prof Mukhi also observed that Assam is strategically located and there has been considerable growth in agriculture and allied sectors.

Mechanization, assured irrigation, rise in fertilizer consumption, use of high yielding variety seeds and soil treatment are the priority areas of the State.

He advocated that there is need to lay emphasis on agricultural growth and acceleration in horticulture, floriculture, spices and organic farming along with creation of adequate non-farm activities.

The Governor also said that NEC should take the opportunity by investment in making Northeast an organic hub of Asia with adequate focus on the animal husbandry and veterinary sector of the State.

Stating that flood and erosion problems faced by Assam in each and every year need to be tackled seriously and therefore, urged upon the NRC for taking projects under water resource sector for finding a lasting and tangible solution to flood and erosion.

He also requested NEC for sustainable backing for Assam to reach the desired levels of growth and development as envisioned in the NER Vision 2020.