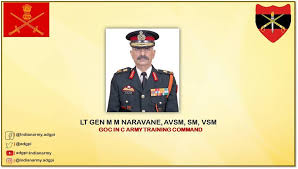 Contrary to media speculations that Army chief general Bipin Rawat would take over as the country’s first chief of Defence Staff, Navarane is strongly billed to get a ‘double promotion of sorts.’

Rawat is likely to be sent abroad as ambassador like his predecessor Gen Dalbir Singh Suhag, who is India’s current envoy in the strategic Seychelles islands.

The selection has already been endorsed at the defence and security levels and awaits final political endorsement.

The experts committee set up at the initiative of National Security Advisor Ajit Doval to finalize the CDS made an important recommendation that went against Rawat and in favour of Navarane.

“Considering the nature of the job and skills required in co-ordination and consensus building, it is desirable that the incumbent is identified through a process of deep selection from amongst eligible three-Star, C-in-C level officers of the three services.

“Experience of working in the HQ IDS should be a prerequisite for future appointments, if not the first one. The selection should strictly be merit based and not merely based on seniority.

“Automatic elevation of a Service Chief (serving or retired) to the CDS is not the preferred option on account of shorter residual tenure and constraints of sudden `switch’ from a single service to tri service orientation.”

“The post should be open to all three services and should not be the monopoly of any particular service. HQ, Integrated Defence Staff (IDS) has matured considerably over the last two decades and is now in a position to provide the CDS with a platform to become fully functional, at par with the Service Chiefs.”

The recommendations points to a three-year fixed tenure (less if a Service Chief is elevated to CDS) and a higher age of retirement than the Service Chiefs, thereby providing continuity.

“However, the rules of business should be revised to read, “that the responsibility of defence of India will from now on rest with Defence Minister and not Defence Secretary”.

Thus, while the CDS, like the Service Chiefs, would have a higher status than the Defence Secretary in the warrant of precedence, they would both be heads of respective military and civilian verticals, having direct access and providing independent channels of advice to the Defence Minister on respective subjects. ”

According to the recommendations   the CDS is expected to play a dynamic role in defence planning, modernization and force restructuring.

While the talk of elevating him to a `five star status’ seems irrelevant in the Indian context, it is equally important that he is not kept confined to being a `glorified CISC’.

Some of the roles marked by the experts for  the CDS are:

* Exercise operational and administrative command over the ANC (Andaman and Nicobar Command); Cyber and Space Agencies (or Commands, as and when they come up) and Special Operations Division.

* Creating an interface with DRDO for formulation of their Long Term Technology Perspective Plan (LTTPP).

* Directing conduct of `technology scan’ of various weapon systems available or to be developed.

* Overseeing and approving intra-service and inter-service prioritisation for acquisitions and aligning these to the Defence Budget, with impediments to be addressed through the DPC.

* Responsibility for establishment and functioning of the National Defence University, all tri-Service Category A training institutions, policy planning and conduct of foreign language training.

* Planning out of Area Contingencies (OOAC) with the three services and conduct of appropriate joint exercises.

* Creation of tri-Service logistic infrastructure and procedures,  tri-Service equipment codification and standardisation, supporting innovation and R&D at DRDO and in private industry.

* Development of an indigenous defence industrial base

The CDS will be inducted in the recently constituted Defence Planning Committee (DPC) which is headed by the NSA who brings the political guidance of the PMO to the table.

If Lt Gen Navarane finally takes over as the first CDS , the Northern army commander Lt Gen Ranbir Singh is likely to take over as the next Army Chief .

Singh is handling Kashmir and the tense situation on the Line of Control with Pakistan.

Navarane’s reputation as a ‘celebral general’ and his knowledge of China, specially the border situation , has helped his cause  says top military sources.

He followed China closely since he was sent to Myammar as defence attache and then as the Eastern Army Commander.