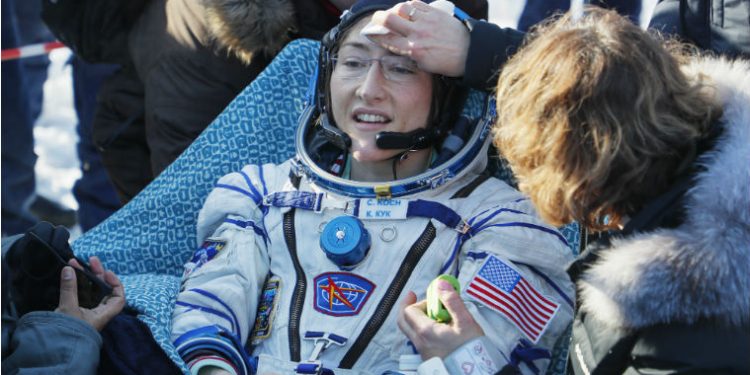 National Aeronautics and Space Administration (NASA) astronaut Christina Koch became the first woman on Earth to have spent the longest duration of 328 days in space.

Koch, who spent nearly eleven months aboard the International Space Station (ISS), had a safe landing along with two of her fellow mates in Kazakhstan at 3.12 pm on Thursday.

She along with Station Commander Luca Parmitano of the European Space Agency and Russian cosmonaut Alexander Skvortsov returned in a Soyuz capsule.

Koch became the second astronaut after Scott Kelley to have spent the longest period of time in space.

Kelley, who is an American engineer, was the first astronaut to have spent 340 days in space.

After preliminary medical evaluations, the crew will be flown by Russian helicopters to the city of Karaganda in Kazakhstan.

Koch said she and fellow NASA astronaut Jessica Meir appreciated that the October 18 spacewalk “could serve as an inspiration for future space explorers.”

The 41-year-old engineer currently resides at Galveston in Texas.