Jamaluddin, a hawker by profession, allegedly had links with the flesh trade racketeers 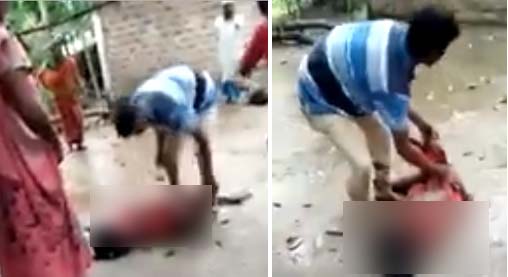 A screen grab of the video.

A man, who brutally beat up and mentally tortured his teenage daughter for her refusal to get into prostitution, has been arrested in Nagaon.

The man, identified as Jamaluddin, a resident of Mowamari village under Samaguri police station in central Assam’s Nagaon district, was arrested by police on Thursday.

The shocking incident came to light after a video of Jamaluddin mercilessly beating up his daughter surfaced on social media.

The 15-year-old girl, who was seriously injured, told reporters that her father badly beat her up for refusing to be a prostitute.

Police officials said Jamaluddin, a hawker by profession, allegedly had links with the flesh trade racketeers.

The police have also found accused Jamaluddin is having criminal background and had married to three women earlier, and forced them as well to get into prostitution, before they divorced with him.

Interestingly, Jamaluddin’s mother Raziya Khatun supported him and she also insisted her granddaughter to get into flesh trade.

Nagaon police have arrested Raziya Khatun on Saturday  based on the statement made by the teenage girl.