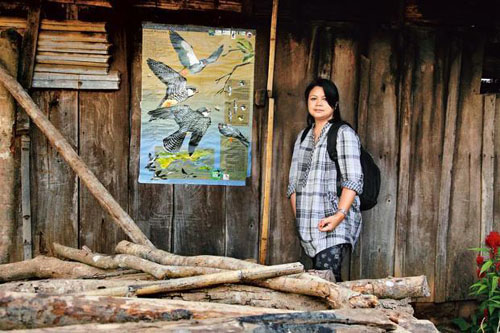 Bano Haralu, a former journalist and a conservationist played a key role in protecting the endangered Amur Falcons and has been instrumental in making Nagaland a bird’s paradise.

These migratory birds from Siberia congregate at the Doyang reservoir in Wokha district of Nagaland and rest there for sometime before flying off to South Africa, their final destination.

Haralu’s conservation journey began in October 2012 when she led a small group of conservationists, including colleague Rokohebi Kuotsu, Shashank Dalvi, a research associate at Bengaluru’s Centre for Wildlife Studies, and Ramki Sreenivasan of Conservation India, to the Doyang reservoir to check whether large-scale hunting was taking place in the area.

They witnessed that the local people of Doyang hunted these migratory birds for food and for sale in the local markets to make a living.

Haralu then began persuading a wide range of stakeholders—from ministers and senior bureaucrats to the local people of Doyang to save the Amur Falcon.

She began explaining about how the migratory bird can help in the development of tourism sector and had successfully made the people of the state adopt the bird as a source of pride.

In 2013, there were reports that none of the Amur Falcons have been killed.

In November 2013, scientists from the Wildlife Institute of India and the United Nations Environment Programme, along with Nagaland forest department officials camped in the Doyang reservoir to satellite-tag the Amur falcons.

Haralu, who received a call from a local of Pangti village said that he saw that the scientists were using fine-quality mist nets to capture the birds but without any success.

But according to the hunter’s opinion of using the traditional method of catching the birds, Haralu arranged for a meeting with the scientists.

The local hunters successfully netted 30 birds for the scientists and three birds were ringed with satellite tags and released, reports The Better India.

The birds Pangti, Naga and Wokha named after three villages around the Doyang reservoir provided the scientists with a lot of valuable information about their lifecycle.

Haralu, who worked with NDTV and Doordarshan as a journalist, carried out a lot of conservation initiatives from bird surveys to mapping biodiversity hot spots and conservation threats in Nagaland.