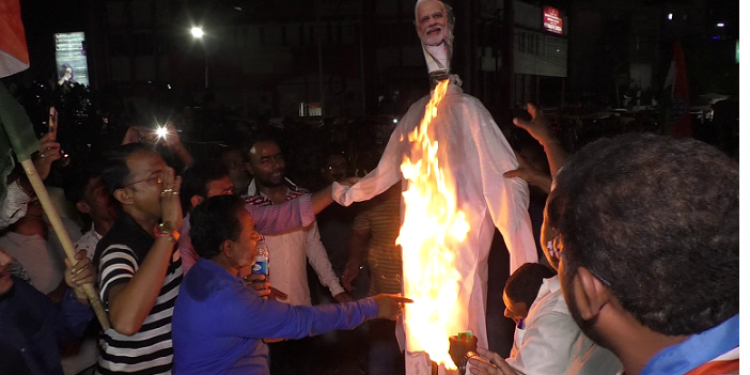 The Tripura Pradesh Congress Committee (TPCC) on Tuesday burnt the effigy of Prime Minister Narendra Modi at Agartala as a mark of protest against his recent remarks on former PM Rajiv Gandhi.

While addressing an election campaign rally in Uttar Pradesh on Saturday, Modi on Saturday had said that the life of Congress president Rahul Gandhi’s father Rajiv Gandhi ended as ‘Bhrashtachari No 1’.

During the protest, the Congress members, who were holding banners, shouted slogans against Modi.

Congress candidate for the Tripura West parliamentary constituency Subal Bhowmik has also condemned Modi’s remarks on late Rajiv Gandhi and said “PM Modi is realising that BJP has gradually lost it grip in the entire country. So he is trying to create issues by dragging such non-issues.”

Bhowmik said, “Modi should no longer remain as Prime Minister as he has disrespected the dignity of his post by making such a statement against former Prime Minister Rajiv Gandhi.”