The Rengma Hoho appealed to the Indian government to call for an early settlement of the decades -long Naga political issue without any discrimination.

The organization had held a consultative meeting of Rengma intellectuals to discuss about the Naga political issue at Kohima on Wednesday. 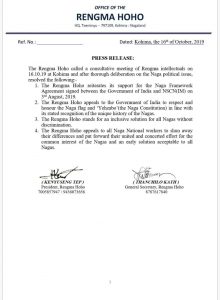 In an official notification, the Rengma Hoho urged the Indian government to “respect and honour the Naga flag and ‘Yehzabo’ (Naga constitution) in line with its stated recognition of the unique history of Nagas.”

The notification appended by president Kenyuseng Tep and general secretary Thanchilo Kath added that the organization stands for an inclusive solution for all Nagas without any discrimination.

“The Rengma Hoho appeals to all Naga workers to shun away their differences and put forward their united and concerted efforts for the common interest of the Nagas and an early solution acceptable to all Nagas,” the notification added.

The organization stated that it reiterates its support for the Naga Framework Agreement signed between the Indian government and the NSCN (IM) on August 3, 2019.

It may be mentioned that cry for solution of the decades-old Naga issue is growing louder in Nagaland with various organizations calling for resolution of the problem.