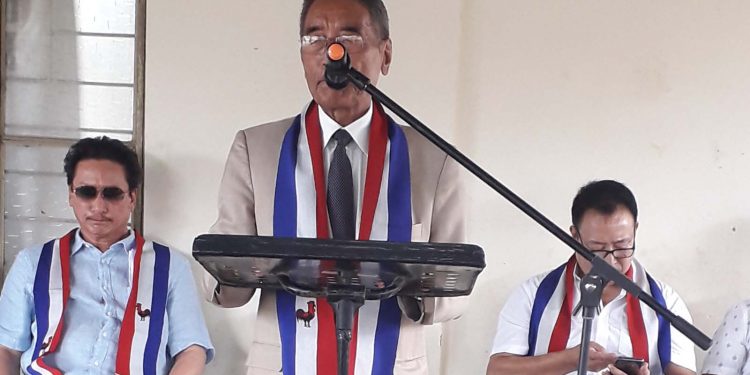 The Opposition Naga People’s Front (NPF) on Sunday said profiling of the state government servants, who have relatives in the Naga national movement set-up, will trigger more social unrest in the Naga society and jeopardize the hard-earned peace process.

It will not only be a futile exercise but would also drive the Nagas further from bringing closer to the parliamentary system of governance, the press bureau of NPF said.

The NPF urged the People’s Democratic Alliance (PDA) government to review its decision of profiling the government servants as this exercise will only engender more suspicions within the Naga society rather than meeting the desired result as proposed by the government of the day.

The state government in a notification in June asked the employees to self declare if they have any family members and relatives with any underground organization.

However, later, the government said it issued the notification at the directive of Nagaland governor RN Ravi.

The NPF said the PDA government either proved its sheer ignorance of the history of the Naga political movement or deliberately attempted to victimize some innocent individuals by directing the employees to declare if they have relatives working in the Naga national movement set-up.

“Perhaps the PDA government has viewed the Naga political issue from very narrow perspectives which is very unfortunate,” NPF’s press bureau said in a statement.

The party said the attempt of the PDA government in profiling the list of the government servants will bring more distrust between the general public and the government machinery.

The NPF cited that the Naga political issue is close to everybody’s heart as far as the Nagas are concerned.

It said the entire Nagas irrespective of being a government servant or not are either closely connected emotionally or intellectually with the Naga political issue.

“It is an open secret and a fact which cannot be denied that every Naga is connected to the issue either in one way or the other,” NPF said.

NPF said it has been consistently maintaining that the Naga political issue can be resolved only through peaceful means and not by way of brute force.

According to the Opposition party, any steps that are detrimental to the present political dialogue should be discouraged in toto. It said it would be too costly if the present opportunity is missed again without hammering out an honourable solution like the political negotiations in the past.

The party congratulated the Ravi on completion of his one year in the office as the governor.

It impressed upon him to put the Naga political issue in its right perspective in the interest of all the stakeholders.