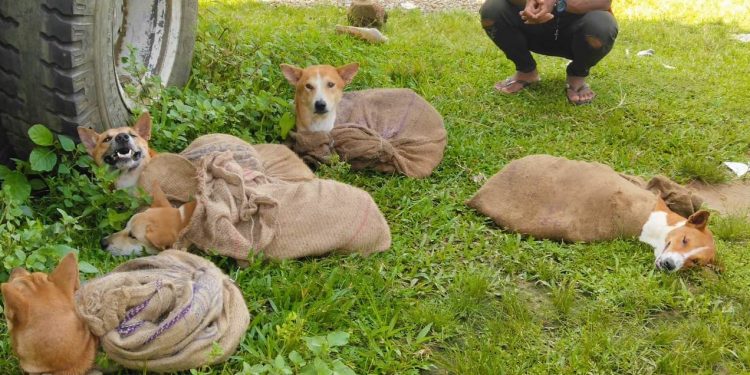 The Federation of Indian Animal Protection Organisations (FIAPO) on Thursday made a fresh appeal to the Nagaland government to take immediate actions to implement a ban on the sale, smuggling and consumption of dog meat in the state.

“We are once again hit by shock and horror at recent images that have emerged from ‘animal markets’ in Dimapur where dogs are seen in terrified conditions, tied up in sacks (gunny bags), waiting at a wet market, for their illegal slaughter, trade and consumption as meat,” FIAPO executive director Varda Mehrotra said in a release.

The FIAPO said it will also be happy to collaborate with the respective local authorities in order to bring more awareness regarding animal laws and initiate the process of change in the state.

It hoped that the state government will accompany this effort with a strong education campaign of awareness of how dogs suffer because of the demand for meat to bring about an overall cultural acceptance of the ban.

The FIAPO said it has been working on this issue and engaging with the state government since 2016. It claimed that it has done a number of undercover investigations on dog meat trade in the region.

It added that the state government was in the process of banning dog meat in 2016. However, there has been no development on that promise and the position of consuming and smuggling of dog meat continues, it said.

The FIAPO said according to its findings, dogs are still, regularly, smuggled across from Assam into Nagaland each day, often all the way from West Bengal.

It said the “dog catchers” in Assam who work for the smugglers get about Rs 50 for a single dog that they catch. The same dog when sold at wholesale in Nagaland costs Rs 1000, it said.

The FIAPO said in the streets of Nagaland, dog meat sells for Rs 200 per kg which is roughly Rs 2000 per dog which is a 40-50 times increase from the catchers “price” a hundred kilometres away.

The FIAPO is India’s leading animal protection body and works with over 160 member organisations, 200 supporter organisations and over 1000 activists in more than 70 cities across India, the release added.