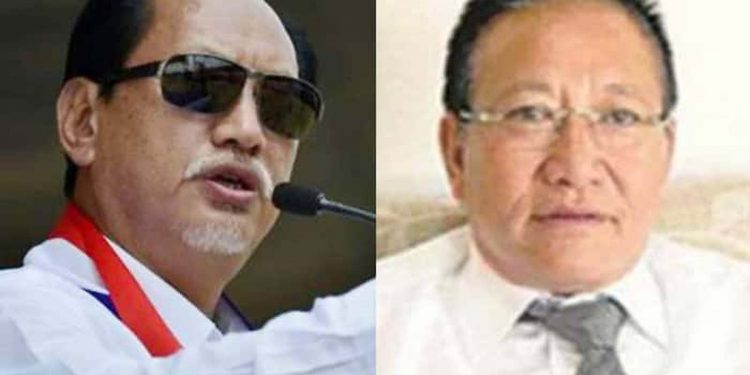 The ruling Nationalist Democratic Progressive Party (NDPP) rubbished the charges of Opposition Naga People’s Front (NPF) that the party was instigating Nagas to go for a solution at any cost, regardless whether the Nagas are granted a separate flag or constitution.

The NDPP, in a statement termed the allegation “absurd” and “ridiculous” and said such irresponsible utterances by a matured political party like the NPF was unbecoming.

It further said neither the NDPP nor the People’s Democratic Alliance is party to the ongoing dialogue between the Centre and the Nag groups.

It was left to the negotiating parties to work out a mutually acceptable formula that is honourable, democratic and long-lasting, said the party.

The ruling party asked the NPF not try to confuse the people with its “false convictions” as the Naga issue is above the individual or organisation level.

It added no one should throw a spanner in the works of the negotiating parties which could jeopardize peace process.

The NDPP said it is “alive” to the situation and playing the role of an active facilitator.

It added the chief minister and his cabinet have continuously held deliberations and consultations with all sections of stakeholders regularly and never shied away their responsibilities.

The CM and the NDPP president Chingwang Konyak met governor R.N. Ravi, who is also the Centre’s interlocutor for Naga talks, to deliberate on the prevailing political scenario and assured him of the party’s support for an early and honourable solution, added NDPP.

The PDA leaders have held consultations with all the negotiating parties and representatives from the government of India to engage with them and find ways to create a congenial environment for the talks to make positive progress, it said.

“What has the NPF done apart from issuing venomous press statements filled with personalised attacks?” the NDPP questioned.

It said it supports the early resolution of the decades-old Indo-Naga political problem in an honourable and democratic manner and respects the unique history of the Nagas.

It also supported the principles of the Framework Agreement and assured support for feelings and sentiments of the masses.

As Naga political issue is above all else, it said the NPF should refrain from using this issue to score cheap political points.

Rather, all sections of Naga society should work collectively in order to achieve an early and honourable political solution that upholds the democratic rights of the people, the NDPP added.