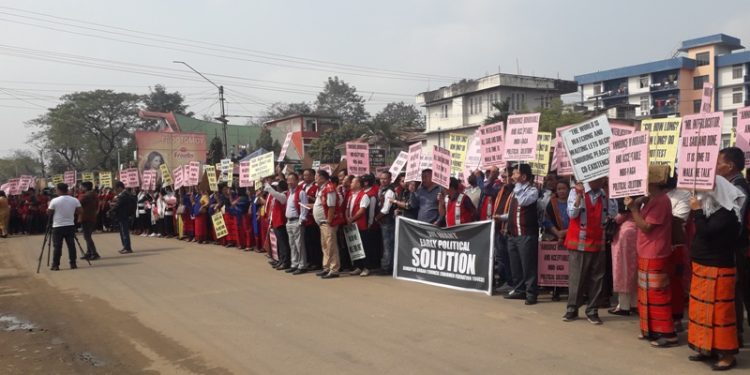 Naga people at a rally in Dimapur on Monday.

The Nagaland GBs (gaon burhas) Federation on Monday organised rallies in all the district headquarters besides Meluri and Tseminyu sub-divisions in the state to demand immediate resolution of the Naga issue.

At the rally held at DC Court junction here, the speakers were unanimous in demanding immediate resolution of the problem.

The president of Naga Council Dimapur, T. Bengerloba, said, “The Nagas are at a dilemma what to do after the negotiations. He said no agreement has been signed though the negotiations between the Centre and the Naga national groups ended on October 31 last year.

“We do not understand what they are doing. The Nagas do not want to linger on. We want immediate solution,” he said.

The president of Naga Women Hoho Dimapur, Sungsabeni Jamio, urged both the Centre and Naga national groups to take a moral stand and resolve the Naga issue for permanent peace in “our land”.

Jamio also announced that this rally would be last one to demand resolution of the Naga issue.  “There will be no rally to demand Naga solution,” she added.

The Nagaland GBs Federation president Shalem Konyak Zalipu said solution eluded the Nagas because of disunity among them.

He also urged the Centre to deliver what have been promised to the Nagas.

The president of Western Sumi Hoho Dimapur Dr Kakheto Zhimomi asked what solution has been brought after 22 years of negotiations.

“The Nagas were told that the talks are in right direction and progressing well. But where is the solution,” he questioned.

Saying that enough is enough, “We will accept whatever the government of India gives but do not betray us,” Zhimomi said.

The memorandum said there is no reason to account for the delay in concluding the ongoing phase of Naga peace talks.

It said it believed that there will be no new subjects or reversals on any matter already negotiated or agreed upon.

The federation urged the Prime Minister to inform the Naga public whatever is on record as on October 31, 2019, when the negotiations are said to have been concluded.

With acceptable and solution in the offing, it said, the Nagas are prepared for an enduring peaceful co-existence after seven decades of conflict.

The federation urged Modi to accord utmost priority to its appeal and inform the Naga public about the date of signing the Indo-Naga peace agreement.