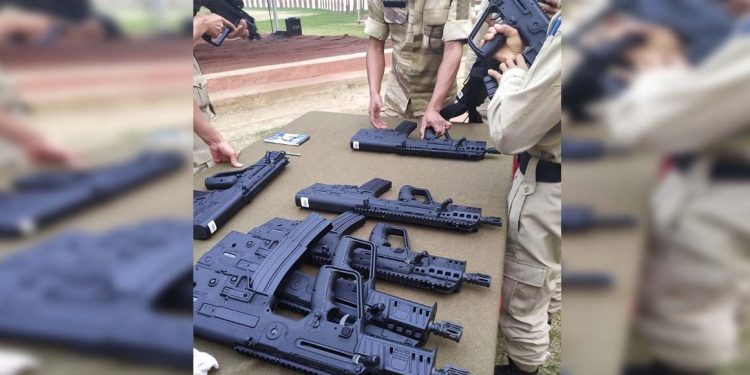 A view of Tavor X95 assault rifles, the first consignment of which has arrived in Nagaland. Image credit – [email protected]

The Nagaland police personnel are all set to use the assault rifles produced by the Israel Weapon Industries (IWI).

#WeTheNagas: Nagaland police is all set to add a new weapon to its armoury as the first phase consignment of Israel weapon industries(IWI) Tavor X95 assault rifles arrived in the state.#Nagaland #Naga #Kohima #NagalandPolice

The IWI Tavor X95, which is also called Micro-Tavor, MTAR, and MTAR-21, is an assault rifle, designed and produced by Israel Weapon Industries (IWI) as part of the Tavor rifle family, along with the TAR-21 and the Tavor 7.

The Tavor X95 can be easily distinguished by the location of its cocking handle.

An X95 cocking handle is closer to the pistol grip.

The Tavor X95, with the use of a relatively simple conversion kit, can be converted from a 5.56 mm assault rifle to a 9 mm submachine gun.

It was earlier reported that being the standard assault rifles of the Israeli military, upgrading to the IWI X95 will have a great advantage for the Nagaland cops during various situations as the assault rifle weighs less than 3 kg, which is one of the lightest assault rifles.