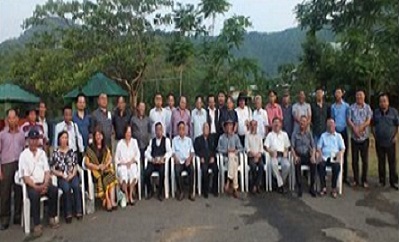 Taking cognizance of suspension of negotiations with the government of India by Naga National Political Groups (NNPGs), 20 apex Naga tribal organisations along with gaonburhas or village heads of Nagaland have urged the working committee of the Naga groups to continue the dialogue with the Centre in the larger interest of the people.

Appealing to the NNPGs to reconsider its decision of suspending the negotiations, the organizations at a joint consultative meeting conveyed by the working committee of NNPGs here adopted a two-point resolution.

Extending support to the existing ceasefire between the government of India and the NNPGs, the meeting said supporting the ongoing political negotiation was possible only under an atmosphere of peace. With the ceasefire agreement, they said, it was normal and obvious that terms and conditions are laid down for the participants to uphold and act accordingly in letter and spirit.

The working committee of NNPGs suspended all negotiations with the government of India on June 3 following a raid carried out by the Assam Rifles at the Jotsoma residence of Naga National Council (parent body) general secretary and co-convenor of the working committee, V Nagi, in Kohima district on June 2.

The working committee of NNPGs said it has decided to suspend all negotiations unless the Government of India comes clean on the question of “haphazard actions” of its agencies that undermine the agreed principle signed on November 17 last year between the two entities.

However, the Assam Rifles refuted the allegation that its personnel harassed, ransacked and mistreated the family members of V Nagi. In a press note, the Assam Rifles said the operation was carried out along with Nagaland police and in presence of local witness and that no ransacking was done nor was any girls’ hostel searched during the operation. It added that there was no mistreatment, damage, harassment or harm caused to anyone including the family members of Nagi.

At the meeting, convener of working committee N Kitovi Zhimomi said the essence and spirit of 1951 Naga plebiscite was very much alive and visible on major issues in the present negotiations.

The working committee was of the view that “if Naga inhabited areas cannot be integrated at this hour, honourable and acceptable political solution must be guaranteed to Nagas in Manipur, Assam and Arunachal Pradesh, enabling Nagas to be their own masters in their ancestral lands.”

The meeting also expressed dismay over the way in which security forces continue to antagonize prominent Naga national leaders with clandestine raids of their homes, without such raids being warranted. “Raid implies suspicious actions against someone whose action is considered to be anti-people. The ceasefire is the thesis and the raid is antithesis and therefore political negotiations and raids cannot go hand in hand,” it stated.

It viewed the raids on the homes of some NNPG leaders as detrimental to peaceful negotiation.

The tribal orgsnisations also urged the government of India to show its commitment towards the ceasefire terms and conditions and to the ongoing political negotiations in action.