Nagaland to have more national highways 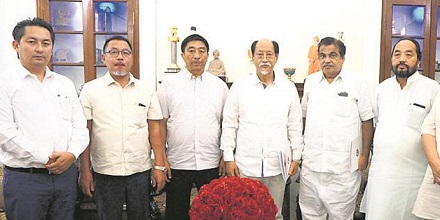 The Central Government is likely to allot more national highways to Nagaland.

This was assured by Union Minister of Road, Transport and Highways, Nitin Gadkari on Wednesday before a delegation led by Nagaland Chief Minister Neiphiu Rio in New Delhi.

Gadkari also asked the State Government to expedite implementation of the ongoing projects.

He further asked the State Government to submit a list of important roads in the State to the Centre.

Gadkari also apprised the delegation that he would be visiting the State soon to review the ongoing road projects.

According to a press note issued by the public relation officer (PRO) of Nagaland House, New Delhi, Rio appraised Gadkari about Nagaland’s road condition and the ongoing projects.

While urging Gadkari to declare more roads as national highways, Rio also requested the Centre to give top priority to road development in different parts of the State.

Later, Rio with his Cabinet colleagues also met Union Minster for Railways, Piyush Goyal to discuss the ongoing railway project in the State.

Rio underlined the importance and benefit of railway connectivity in different parts of the State.

He also urged Goyal to increase stoppage time of Rajdhani Express and other trains passing through Dimapur railway station in the interest of Nagaland and the neighbouring state dependent on the railway station.

Assuring full support, Goyal said the dream of railway connectivity in all parts of the Northeast will soon see light of the day.