Five meritorious research scholars from various centres/schools of Jawaharlal Nehru University in Delhi will be presented the national awards during the function.

The award has been supported by the office of the Nagaland governor, PB Acharya.

The programme, to be organised SAA Auditorium, will start at 4 pm and will conclude at 6 pm.

It has been reported that during his visit to Delhi governor Acharya will also be in conversation with screenwriter, columnist and author Advaita Kala at the AAVAAHN 201919 ‘A Call of Changemakers’ at IIT Delhi on March 17, 2019. 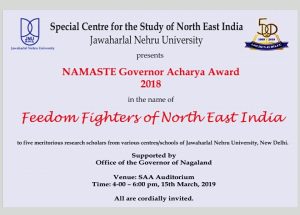 Besides, Arunachal Pradesh‘s Sotai Kri was appointed as the convener of the committee.