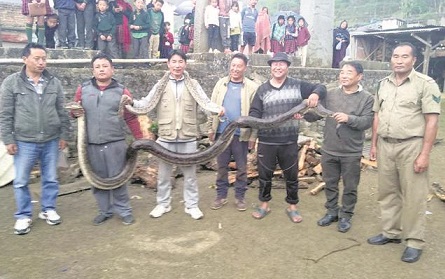 In a sheer exhibition of wildlife conservation, Pfutseromi villagers of Pfütsero town of Nagaland handed over a huge python and its baby to the Forest Department on Wednesday.

This noble initiative by the villagers was done adhering to the appeal made by the Chakhesang Public Organization (CPO) and Chakhesang Youth Front (CYF) to protect and preserve wildlife.

The handed over the Burmese rock python and its baby to the Nagaland Zoological Park (NZP) situated at Rangapahar in Dimapur.

Officials of Department of Environment, Forest and Climate Change, Phek forest division, transported and handed over the reptiles to Nagaland Zoological Park at Rangapahar on Wednesday afternoon.

CYF press secretary, Kupelhi Lusou, told the media that the pythons were caught by villagers at Matikhru village under Meluri sub-division on April 15 evening.

On receiving the information, the Pfütseromi villagers residing at Pfütsero town had gone to buy the pythons for consumption.

However, on reaching the spot, the villagers discovered that both the pythons were alive and therefore felt the importance to protect and preserve the wild beauties.

Accordingly, the pythons were transported to Pfutsero town and later the Forest Department officials were informed and handed over with a request to the department to take care and protect them.