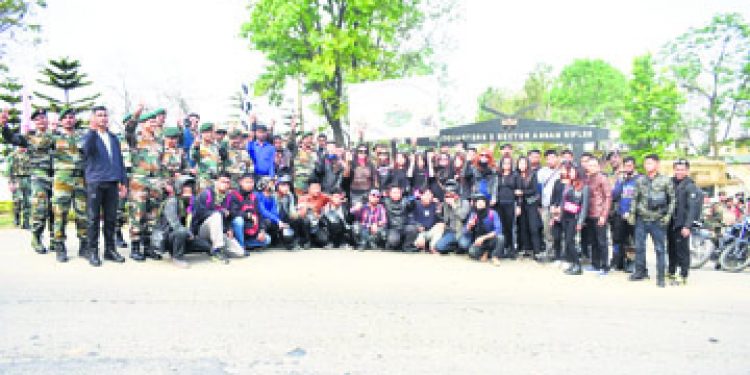 To commemorate the platinum jubilee of the Battle of Kohima fought during World War II, a bike rally was flagged off from Tsiesema Basa for a challenging rally across Nagaland on Saturday.

The event is a joint effort of Assam Rifles and citizens of Nagaland, according to reports.

During the rally, 43 bikers will touch nearly all major towns of Nagaland including Kohima, Pfutsero, Kiphire, Tuensang, Mon, Mokokchung, Zunheboto and Wokha covering a distance of more than 1050 km. The rally constitutes both women and men bikers and will be flagged in at the Jotsoma Auditorium (RCEMPA) on April 4.

Speaking at the flagging off ceremony, Commander of 5 Sector Assam Rifles exhorted all riders to forge bonhomie during the drive. He also reminded them of the great contribution by the Naga people during the Battle of Kohima and that peace is the only solution as embodied in the motto of the 75th Anniversary of Battle of Kohima i.e Remembrance – Reconciliation – Rebirth.

In a similar event, Tuensang Battalion in collaboration with civil administration and NGOs of Tuensang district also flagged off a motorcycle rally on March 30 at Parade Ground, Tuensang.

The riders will cover a distance of 475 Kms along Tuensang–Mon–Mokokchung–Zunheboto. About 900 students of St Joseph School, Tuensang accompanied by 23 teachers witnessed the flag off ceremony.