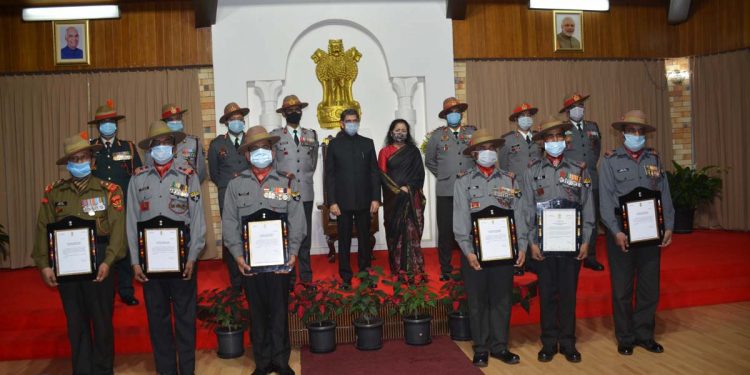 In a first of its kind in Nagaland, state Governor RN Ravi conferred Unit Citation and Unit Appreciation to Assam Rifles units and Territorial Army Battalion at Raj Bhavan in Kohima on Tuesday.

“In honouring you, I feel honoured because the whole country is very proud of you,” Ravi said while felicitating the Assam Rifles, a Raj Bhavan release said.

He said Assam Rifles and the Territorial Army Battalion have been providing yeoman service all over the country, carrying responsibilities for almost 200 years.

Ravi said during British time, they performed exceedingly well in keeping the Japanese force at bay and defended Kohima.

He lauded Assam Rifles for their successful missions not only in counter-insurgency but also in containing Chinese expansion in the border areas.

Ravi spoke of the important role played by Assam Rifles in maintaining peace and law and order at the beginning of the creation of Nagaland state, as there were not much police personnel.

He added that they have also been providing selfless service in times of natural calamities.

The 3 (Naga Hill) Bn. Assam Rifles was conferred Unit Citation and the 22, 36, 41 and 45 Assam Rifles and the 164 Territorial Army Bn. were conferred the Unit Appreciation.